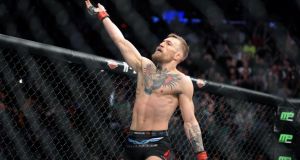 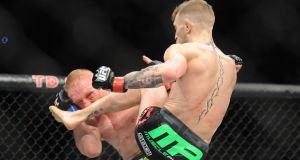 Seconds after Sunday’s Ultimate Fighting Championship fight with Dennis Siver was mercifully stopped, the victorious Conor McGregor leapt over the top of the cage and confronted featherweight world champion José Aldo. Sitting in the second row with his wife, Aldo merely smiled during the ensuing ruckus as a screaming McGregor was restrained by security.

That spectacle in Boston wasn’t to everyone’s tastes, but it garnered attention for a fight between the two, and, like any good promoter, UFC president Dana White didn’t have a problem with the antics.

“That’s Conor’s personality,” said White after the event. “It’s the way he is.”

White then confirmed that McGregor will challenge Aldo for the 145-pound title in Las Vegas this May.

From a promoter’s perspective, a fighter’s ability to sell an event is more important than his combat skills. But McGregor has the rare combination of exceptional talent at creating hype and destroying opponents. After just five fights in the UFC, the Irishman has quickly become an indispensable figure to the billion-dollar organisation.

McGregor is a proven revenue generator, as evidenced by the nearly 14,000 tickets sold for Sunday’s event in Boston’s TD Garden. The turnout was all the more impressive given that 12 per cent of tickets were bought in Ireland and the local New England Patriots played a major NFL game that night just a few miles outside the city.

Some might argue that the UFC is rushing McGregor into a bout against one of the best pound-for-pound mixed martial artists. The UFC could continue to promote McGregor against overmatched opponents like Siver for another year, thus enhancing McGregor’s brand and experience, while driving up the prospect of bumper US pay-per-view sales for an eventual showdown with Aldo.

However, the UFC organisation has had a difficult 18 months, and needs to deliver high-profile events whenever the opportunity presents itself. In November the Standard & Poor’s ratings agency warned that Zuffa LLC, the UFC’s owner, may have had a 40 per cent drop in profits for 2014. Even White noted that pay-per-view sales declined last year – a rare admission of concern from the typically boastful executive.

The shine has also diminished on some of its biggest stars recently, with Georges St Pierre taking an indefinite hiatus from the sport, while the organisation’s best fighter Jon Jones was found with cocaine in his system just three weeks before a major bout.

A McGregor-Aldo event will bring much-needed positive attention to the UFC, and, if victorious, the Irishman will likely become the sport’s biggest name. And McGregor has wasted little time in building up interest in the fight. Speaking with a Midleton Rare whiskey in hand during Sunday’s post-fight press conference, McGregor explained why he jumped out of the cage to confront Aldo.

“They thought I was going to see my girlfriend,” said McGregor. “But I was going to kill that little Brazilian.” Why didn’t he follow through on his threat? “I like money,” he said to a chorus of laughter from the room. “And when fights happen outside the Octagon they take that money.”

Gift of the gab

Few professional sportsmen have that gift of the gab, or the ability to back up their boasts. Such is McGregor’s popularity, the UFC looked into the prospect of staging the Aldo bout in Croke Park on May 23rd, but revenue considerations drove the selection of Las Vegas.

“You lose about 25 to 30 per cent on pay-per-view being in another country,” noted Dana White. “[Even] with 91,000 people there, you actually do a bigger gate in Vegas, probably $2 million more.”

“Of course, [Croke Park] is a dream of mine,” said McGregor, “But we discussed big business, and big business happens to be in viva Las Vegas.”

And while early odds show him as an underdog against the formidable Aldo, as long as the Irishman creates public interest, McGregor will be a favourite with UFC executives.