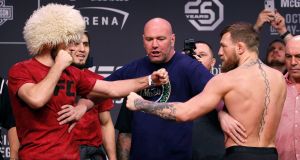 Conor McGregor and Khabib Nurmagomedov face off during a ceremonial weigh-in for UFC 229, in Las Vegas, Nevada, US. Photograph: AP Photo/John Locher

Conor McGregor attempted to take the fight to Khabib Nurmagomedov a day before their eagerly anticipated UFC lightweight title showdown.

The pair both made the 155lb limit on Friday morning for their fight at UFC 229 but tensions threatened to boil over at the ceremonial weigh-in later in the day at the T-Mobile Arena in Las Vegas.

As they got into their fighting poses, McGregor brought his arms down on Nurmagomedov’s arm before aiming a kick at his bitter rival after being beckoned forward by the Russian.

Nurmagomedov seemed unflustered by the antics or another barracking from a crowd largely supporting McGregor, whose entourage on the stage at the venue included the rapper Drake draped in an Irish flag.

McGregor made one last attempt to charge at Nurmagomedov but the fighters were held back from each other by a throng of security personnel.

McGregor then turned his attention to the thousands in attendance at the event, to revel in their support as he prepares for his first UFC bout in nearly two years.

Nurmagomedov was heavily booed at the open workouts and the news conference for the fight earlier this week, so it came as little surprise when he was once again subjected to jeers from the crowd.

“I want to say thank you to all Irish fans around the world. Because of you guys, this fight is happening.”

The unbeaten Nurmagomedov is making the first defence of the lightweight title he won in April by outpointing late replacement Al Iaquinta, taking his professional record to 26-0 as a result.

He has struggled to make weight in the past, most memorably being withdrawn from a contest against Tony Ferguson last year by doctors, but there seemed to be no problems this time around.

All fighters on the card had a two-hour window from 9am local time to weigh in and Nurmagomedov turned up immediately to tip the scales at 155lbs.

McGregor arrived a little more than an hour later and came in at half a pound lighter.

This weekend’s event has been billed as the biggest in the UFC’s history and is forecast to set a new benchmark in pay-per-view buys for the organisation.

McGregor’s comeback is unquestionably a factor in that. The 30-year-old is set to compete in mixed martial arts for the first time since November 2016, when he defeated Eddie Alvarez to become the only fighter to hold two UFC titles simultaneously.

However, his absence from competition meant he was stripped of both the featherweight and lightweight crowns, with Nurmagomedov succeeding McGregor as top dog in the latter division.

The animosity between the pair ramped up significantly in April when McGregor threw a dolly at the window of a bus containing several fighters, including Nurmagomedov.

The war of words has intensified ever since, contributing to plenty of ill feeling between both camps and adding to the anticipation for the fight. – PA