Celebrating the enduring flair of the amateur

‘He (Pollock) passed me at 20 miles, absolutely on the rivet ... and his ability to hurt was absolutely incredible’ 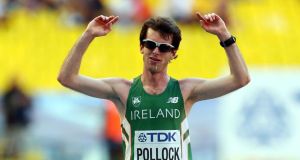 If I was Sir Roger Bannister, the thought of what’s coming down the track next May would be terrifying. Imagine every sporting media outlet in the world looking for you to help mainline the nostalgia trip and explain what it feels like to be the last of the original sportsmen.

Bannister, fortunately, has never lost his lusty innocence, and 60 years after running the first mile in less than four minutes won’t mind recalling his moment in time in all its glorious detail. He’ll be 85 by then – God willing – and the tale of what he achieved on the old Iffley Road Track that afternoon in 1954 holds up today not just for the sporting milestone it created but for the way he went about it.

“I must be the international athlete who trained least,” Bannister told me, in Dublin, around the time of the 50th anniversary of his 3:59.4. “I had worked out, from my knowledge of physiology, what was the minimum amount of training that would be needed to continue to improve year by year.”

Bannister certainly wasn’t lazy: quite the opposite. The main reason he trained so sparsely was because he was also juggling the demands of his medical studies at Oxford, and actually did a round at St Mary’s hospital in London on the very morning of his historic run, partly so that he could sharpen his race spikes in the physiology lab. Just six weeks later Bannister completed his medical degree.

He was, in other words, the perfect “amateur” – not long before that became a dirty word. Driven by the sheer love of running, and exploring the limits of his physical and mental capacity, Bannister’s idea of strength and conditioning was a long hike in the Lake District. He famously didn’t have a coach, and there was no difference between his warm up or warm down because he did neither.

These days, of course, being “amateur” is a sign of weakness, spoken only in derision, as no athlete can ever expect to succeed without being the consummate “professional”. Yet what Bannister also had was a reserve of mental fortitude that no so-called “professional” training can necessarily produce.

Importance of balance
It could be that Bannister’s achievement, 60 years on, might provide a timely reminder that while the slick professional attitude is fine, it doesn’t always result in the superior performance. Because Bannister also understood the importance of balance, and not just in sport but in life.

Maybe he was the original of the species, although perhaps not yet the last of them, because Paul Pollock might just be one of those runners, too.

What Pollock definitely shares with Bannister is the lure of the medical profession. Now 27, his 10-year running career has so far placed second to his medical career, and after graduating from Queen’s University in 2010, life has effectively revolved around the 13-hour shifts in the A&E Department in the Royal Hospital, Belfast.

Not that this did his running career too much harm: last year, on a training schedule that meant running to hospital in the morning, and home again that evening, he was the first Irish finisher in the Dublin marathon, his 2:16:30 the fastest by an Irishman in the race in 19 years.

On the back of that Pollock was selected for the World Championships in Moscow last August, and in a race of almost exclusively full-time marathon runners, worked his way through the field to finish 21st, the second best European. That performance, more than anything, was based on mental fortitude: “He passed me at 20 miles, absolutely on the rivet,” says Chris Jones, our national endurance coach, “and his ability to hurt was absolutely incredible.”

Going full-time
Around the same time Pollock realised his amateur ideals were proving too much of a conflict with the professional nature of elite distance running.

So, two days before departing for Moscow, he took a leave of absence from the hospital, provisionally pencilling in post-Rio 2016 as his return date.

Since then he’s been based in Teddington, London, and among the early discoveries of becoming a full-time athlete is that for years he’d been training in runners two sizes too big – which in fairness wasn’t very professional.

At 27 Pollock might also be described as a late developer, but what is certain is that his best is yet to come. Earlier this month, at the National Inter-counties cross country in Santry, he crushed a strong men’s field, and next Sunday, goes to the European championships in Belgrade bound, it seems, only by the limits of his mental fortitude.

“It’s a hard race to win, obviously, but I think I’m in shape to win it,” he said, with refreshing boldness.

The hope now is that Pollock doesn’t entirely lose his amateur flair or succumb to any of the pressures of success, as his fellow native of Holywood, Co Down, golfer Rory McIlroy, pointed out this week might well be leading to an increase in stress-related illnesses.

Fionnuala Britton, by the way, although utterly professional in her approach, hasn’t lost some of the amateur flair either, especially when it comes to cycling to and from training sessions on a heavy bike.

If she wins a third European title next Sunday it too will be based on the ability to hurt, and the mental fortitude that Bannister always prized above anything that professionalism had to offer.

1 Tour de France: Every yellow jersey winner must feel guilty by some association
2 Gordon D’Arcy: If South Africa moves up north, it could all go south
3 Charlesland Golf Club set to close permanently in December
Real news has value SUBSCRIBE