Carbon-fibre bicycles in the frame for rising number of injuries

While the material is favoured for weight and strength, its durability is in doubt 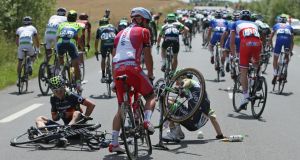 Riders have described landing on the top, horizontal tube of the bikes during crashes and ending up on the road after their frames splintered and collapsed. Photograph: Doug Pensinger/Getty Images

In terms of technology three-time Tour de France winner Greg LeMond was a pioneer. When steel dominated, LeMond rode bikes made of carbon-fibre composites, then an exotic material mostly used by the military.

At this year’s Tour, carbon fibre is the only material used for bikes and it has also replaced aluminium in wheel rims. Strength, weight and design flexibility has ensured the material’s dominance. And its most extreme form, the time-trial bicycle, was on display in Saturday’s 20th stage.

But there’s a catch: unlike steel or aluminium, carbon fibre does not bend in crashes. The bikes and wheels frequently shatter, often hurling riders to the road and, many fear, increasing severity of injuries.

“Anyone in a team who’s being honest with you will tell you how frequently their bikes are breaking; everybody knows,” said Mark Greve, a physician and assistant professor of sports medicine at Brown University who studied injuries to 3,500 competitive cyclists. “Few people in the public appreciate how many bikes a pro team will go through in a season, because they break

Having conquered professionals, who ride frames that retail in the United States for $5,000 (€3,700) to $6,000 with forks, carbon fibre is making its way to increasingly affordable models available to the more casual riders.

A code of silence exists among riders, even retired ones, and mechanics and team officials over the carbon bike and wheel durability. The teams and riders exist, in part, to act as powerful marketing tools for bicycle makers. But when they spoke on the condition they not be identified, their stories emerged. Riders described landing on the top, horizontal tube of the bikes during crashes and ending up on the road after frames collapsed. Even small spills often require a bike change. Mechanics say they sometimes return the shattered remains of frames to manufacturers in bags intended to hold a single bicycle wheel.

“Would I be happy to use a carbon bike if I was still racing?” said Robert Millar, one of the first riders to ride carbon bikes, a former team-mate of LeMond’s and a winner of the Tour de France’s best climber jersey. “Yes, but that would be a custom product . . . cost would be irrelevant.”

Two big shifts have occurred since Millar, LeMond and others introduced the material to cycling. Initially, the bikes mimicked steel-frame construction and used tubes that were cut and glued into aluminium lugs.

In today’s bikes carbon fibre is woven into a fabric. Frames are now built in moulds, enabling exotic and aerodynamic shapes within the limits set down by the International Cycling Union. By manipulating the fabric used in different parts of the frames, manufacturers can stiffen it in some areas, such as around the cranks, while building in flexibility for rider comfort in areas where it will not affect performance.

Once the fabric is in place, it is coated with epoxy, effectively creating a carbon-reinforced plastic bicycle.

Doug Perovic, a professor of materials science and engineering at the University of Toronto, said carbon fibre was a bit like a diamond: strong while not being particularly tough.

The Boeing 787 Dreamliner makes up for carbon’s lack of sturdiness by building up several layers of material, said Prof Perovic. But bicycle makers use its exceptional strength to make the bike’s structure as thin and thus as light as possible.

What results, said Prof Perovic, is that when a bike is stressed beyond its limits, it “fractures into many pieces”.