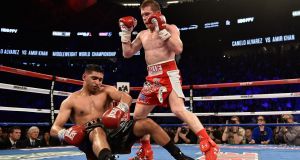 Canelo Álvarez knocks out Amir Khan in the sixth round. Photograph: Getty

Amir Khan suffered a knockout every bit as brutal as the first one of his career here on Saturday night when Saul “Canelo” Álvarez threaded a chilling right hand on to his briefly exposed jaw in the sixth round to leave the Briton senseless on the canvas for a couple of worrying minutes.

“I’m all right, I’m all right,” Khan told his concerned corner after rising – but the tears flowed as he lent his head on the shoulder of his trainer, Virgil Hunter, knowing a split-second lapse in concentration had undone all his good early work, as he “dared to be great” by going up two weights to challenge the Mexican for his world middleweight title.

They shared anxieties, but differing forms: Khan’s in concern for his chin, Canelo perhaps worried he would run out of time if he fell too far behind. As it happened, the Mexican timed his fight to perfection.

“I got in the ring with a big guy, but this is boxing,” Khan said after the fight, looking suitably recovered. “I want to be the best, I want to fight the best, but my natural weight is 147.”

Canelo, admitting he had been in a tricky engagement before pulling off a peach of a punch, said through an interpreter, “I knew time would come to my favour.”

At ringside, the man considered by many as the best 160lb fighter operating today, Gennady Golovkin, watched his rival’s work with interest. “I will fight him later this year,” Canelo said to the raucous cheers of his supporters. “Viva Mexico!”

For Khan, there is the consolation of dropping back down to welterweight, where he is the mandatory challenger for Danny Garcia’s WBC belt, but it will take him a little while to come to terms with the manner of his defeat.

Nobody could – and no sensible pundit would – accuse Khan of not reaching high. He was attempting the biggest upset by a British boxer fighting abroad since John H Stracey beat the great Jose Napoles in Mexico City in 1975; Lloyd Honeyghan’s inspired victory in six rounds over a weight-drained but still estimable Don Curry in Atlantic City 30 years ago is in that mix; before that, we have to dip into ancient history. This was some wall to climb, too tall as it happened.

And speaking of walls, every Las Vegas cleaner, janitor, construction worker and cab driver with roots south of the border were pulling for their cinnamon-topped hero, and would mightily have loved it had their bête noir, Donald Trump, been dumb enough to accept an invitation to sit somewhere in the cheaper seats.

Khan’s small but vociferous army, who have been by his side here since he began his grand American adventure nine fights and nearly six years ago in Madison Square Garden, were vastly outnumbered, of course. And there weren’t many neutrals among the 16,540 squeezed into the new arena. The mood of high drama and respectful conflict could not have been more intense.

This, though, was Canelo’s town for the weekend, Cinco de Mayo, co-opted since the days of Julio Cesar Chavez we were told, even if, contrary to the salesmanship of the event’s golden-tongued promoter, Oscar De La Hoya, only a handful of his fights in this city coincided with Mexico’s most cherished national holiday. Still, this is boxing; on a night when the great Panamanian Roberto Durán was introduced at ringside as Mexican, we were reminded that myth and hokum are perennial ingredients of the pie.

There was nothing counterfeit about the fight, however. It was as honest as a desert sunset. The most common larceny in this town and this business is of the spirit and the pocket, but nobody could complain they were shortchanged while it lasted.

From round one, Khan’s reflexes and concentration were on fire. If those faculties let him down in previous disasters – against Breidis Prescott eight years and in 2012 against Garcia – here he was, “en fuego”, as they say.

Khan stole the first round with stealth and that snaking jab, as expected, sniping from distance and circling his prey. Khan said beforehand he expected to be hit and hurt, but he was doing his damnedest to make a liar of himself as he made the early running – literally – and a rare left hook rattled his teeth without obvious discomfort.

Canelo found his range a couple of times in the third, but Khan continued to shift left, right and every which way to stay out of trouble, picking on the move like a bird in the park.

“Canelo never backs down” said the message on the T-shirts of his compadres, but Khan was taking that out of the equation by not asking him to, as he continued to box at range, scoring with intermittent flurries. It was nearly 12 minutes before they clinched, so clean was the action.

There was a case for giving the champion the fifth, as he landed a couple of solid head shots, but Khan remained cool under fire. And there was some way to go. Could Khan contain his natural thirst for a fight and hold his concentration?

As they got to half way, Canelo, more relaxed, began to let his hands go and, for the first time, looked the more dominant fighter. And that is when the crunching conclusion arrived – a long right hand from out of the blue that landed with such precision the British challenger was unconscious before he hit the canvas.

Boxing always craves fresh talent and on the undercard the virtuoso boxing of the promoter’s baby-faced cousin, Diego De La Hoya, caught the eye of knowledgeable fans who turned up before the pay-per-view broadcast began.

The smooth-moving super-bantamweight toyed with the unbeaten and game Californian, Rocco Santomauro, in nearly every exchange before an audacious uppercut on-the-walk in the seventh coincided with the merciful intervention of his opponent’s trainer, Shane Mosley. We will be hearing a lot of 21-year-old De La Hoya, who has stopped nine of his 15 opponents, and embarrassed all of them.

All in all, not a bad night for Mexico.