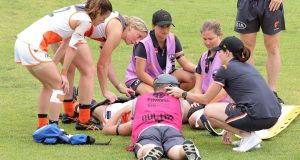 Bríd Stack of the Giants is attended to by medical staff during the AFLW pre-season match between the Adelaide Crows and the GWS Giants at Norwood Oval in Adelaide, Australia. Photo: Daniel Kalisz/Getty Images

Former Cork footballer Bríd Stack received lengthy medical attention on the pitch and was then taken to hospital after a heavy collision in her debut for Greater Western Sydney Giants in a pre-season friendly in Adelaide on Sunday.

“Unfortunately Irish recruit Bríd Stack has been taken to hospital following spinal precaution protocols after a collision in a tackle late in the fourth quarter,” the Giants said in a statement. “She’s in the best possible care and we will provide a full update when we have further information.”

The Cork Ladies Gaelic Football Association later tweeted that there was “positive news coming from Australia where Brid Stack will make a full recovery from her injury”.

The Giants were playing the Adelaide Crows at at the Norwood Oval in preparation for the start of their Australian Football League season on February 9th. Stack sustained her injury in the final minute of the fourth quarter when she fell to the ground after a tackle, the medical staff placing a spinal support on her before she was stretchered away to an ambulance.

One of the first players to rush to her side after the incident was her new teammate Cora Staunton, who has been with the Giants since 2018.

Having retired from Gaelic football two years ago, after winning 11 All Ireland senior medals and seven All Stars, Stack took up an offer from the Giants to try her hand at Aussie Rules, the 34-year-old moving to Australia in December with her husband Cárthach Keane and their 14-month-old son Carthach Óg.

They spent two weeks in quarantine in Perth before travelling Albury, north of Melbourne, where Stack joined up with the squad for the first time at their training camp.

5 Fabien Galthié cleared of any wrongdoing for leaving bubble