Basketball: DBS Éanna aiming to bounce back to winning ways 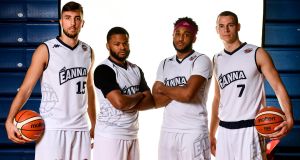 It’s all to play for in the Men’s Super League this weekend, as DBS Éanna finally surrendered their winning streak last weekend at the hands of DCU Saints in a big Dublin derby.

Now, Éanna sit joint top of the table with reigning league champions, Garvey’s Tralee Warriors, and though they have a game in hand on last year’s winners, they face a very tough battle this weekend as they welcome Belfast Star to Dublin on Saturday evening.

Belfast Star come in off the back of a big home win against UCD Marian last weekend to put them in joint second place with a 4-3 record.

This weekend, they will need point guard CJ Fulton to be on form, and will also look to the inside presence of Keelan Cairns and the shooting prowess of Ben Marello to help them secure the win.

Éanna will be aiming to bounce back strongly from that first loss last weekend, and will be hoping Josh Wilson – who missed last weekend’s clash – will be back healthy for this weekend. Stefan Zecevic and Marko Tomic will also need to be in top form to help Éanna across the line.

Down in Kerry meanwhile, another local derby is in store as Garvey’s Tralee Warriors travel to near neighbours Keane’s SuperValu Killorglin on Saturday evening.

The sides met just a few weeks ago in the opening round of the National Cup and, with Warriors taking the spoils on that occasion, Killorglin will certainly be hoping to reversing the outcome this weekend.

Elsewhere, Griffith College Templeogue will be hoping they can bounce back strong this weekend, after they suffered an 83-71 point loss at the hands of Maree in Galway last week. They are back at home this Saturday and face DCU Saints who will be coming into the game with confidence after defeating Éanna last weekend.

Maree meanwhile will be hoping to carry the momentum from that win against Templeogue into this Saturday evening’s clash as they travel to Dublin to face off against Pyrobel Killester as part of a big double header weekend, that also sees the two teams go head-to-head in the Women’s Super League.

Killester come into the game following a big win down in Cork against Neptune. Speaking of Neptune, they face into a tough test against Moycullen on the road this weekend and will be hoping to get back to winning ways after two tough losses in-a-row.

The final match up of the weekend is another Dublin derby as UCD Marian go head-to-head with Dublin Lions. Lions are still hunting for their first win of the season and but Marian have yet to lose a home game this season.

It’s just as interesting over in the Women’s Super League, with DCU Mercy managing to overcome Fr Mathews’ tough challenge in Cork last weekend to remain unbeaten at the top of the table.

They welcome Brunell to Dublin on Sunday afternoon, with the Cork outfit buoyant after a big home win last weekend where new signing, Treyanna Clay, impressed.

Fr Mathews meanwhile will be hoping to get back to winning ways on Saturday evening when they travel to Kildare to face reigning league champions, Liffey Celtics. Celtics come into the game after a tough home loss against Ambassador UCC Glanmire last weekend, and will be hoping that they can pick up a vital win.

Elsewhere, Pyrobel Killester will welcome Maree to Dublin as part of the double header with the men’s game. Maree come into the clash sitting second in the table, following an impressive win over Maxol WIT Wildcats last weekend, and have just one loss to their name so far in their maiden year in the Super League.

Killester sit just behind them on the table though, and are known to be explosive in their home court, so this will be a tough fixture for the Galway side.

Wildcats travel to Cork to face a Glanmire side with their tails up following two big wins in the league and Cup against Liffey Celtics. Both sides have lost two games so far this season and the battle under the boards could be where this game will be won.

The last game of the weekend meanwhile sees a bottom of the table clash between IT Carlow Basketball and Marble City Hawks. Both sides have yet to claim a win this season, with Carlow unlucky not to pip Fr Mathews in Cork a few weeks ago. Katie Fox as always will be one to watch at the top of the key for Hawks, while Carlow’s Kaitlyn Slagus has proven to be a handful for a number of the top teams.