Australia have called off their tour of Bangladesh

Cricket Australia: ‘The safety of our players and officials is our highest priority’ 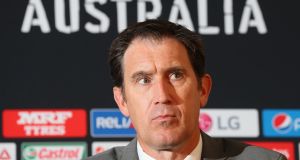 Cricket Australia Chief Executive James Sutherland has said that the tour of Bangladesh has been called off. Photograph: Quinn Rooney/Getty Images

Australia have called off their tour of Bangladesh due to concerns over player safety after a security threat.

The tour, which would have included two Tests, was due to begin with a warm-up match in Fatullah on Saturday.

However, the squad’s planned departure on Monday was postponed after the Australian government updated its travel advice for the region.

On Wednesday, the Bangladesh Cricket Board had promised “VVIP” treatment for the Australian team, saying they would be given the same level of security afforded to visiting heads of state — but it has not been enough to persuade Cricket Australia to go ahead with the tour.

Cricket Australia chief executive James Sutherland said: “This has been a very difficult decision. Following the most recent information from Australian Government agencies and our own security advisers, we have decided that, regrettably, we have no alternative but to postpone the tour.

“Over the last few days we have sought to obtain as much information as possible about the risks for Australians travelling to Bangladesh.

“We had hoped that the security concerns would fade, but unfortunately the advice we have received from government, our own security experts and independent security advisers has clearly indicated that there are now high risks to our people should they make the trip.

“We have worked tirelessly to try to find a way for the tour to proceed, but in the end it was simply not possible.”

Sutherland expressed his gratitude to the Bangladesh Cricket Board and the Bangladesh government for their efforts to help the tour go ahead, but said that player safety had to come first.

“We understand that this decision will be very disappointing for the cricket community in Bangladesh,” he added.

“However, from an Australian perspective, the safety of our players and officials is our highest priority. We will work with the BCB to reschedule the tour as soon as possible.”

The official postponement of the tour had seemed likely given that Australia’s 15-man squad had been instructed to return to their state squads and train ahead of the domestic season.

That decision was made before the BCB promised unprecedented levels of security for the tourists.

“We have left no stone unturned in providing assurance regarding security for the Australian team,” BCB president Nazmul Hassan said in a statement on Wednesday.

“The Bangladesh Government has committed additional security on top of the substantial and elaborate arrangements in the BCB’s standard security plan for international cricket.

“For the team (Australia) the level has been confirmed as VVIP which is equivalent to security accorded to head of states and is unprecedented for any international side.

“We are still hopeful that a fresh date for arrival of its team will be declared by CA and we will see some exciting cricket on the ground soon.”

Bangladesh has hosted Test cricket since 2000 without a major security incident and in the BCB statement the governing body said it was “dismayed at the apparent attempt by certain quarters in trying to project Bangladesh as an unsafe place”.