Aqua Blue Sport all set for their Vuelta a España bow 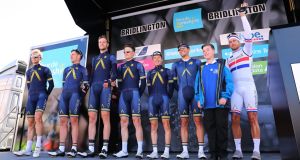 Eight months after it made its debut, the Aqua Blue Sport team is making the final countdown to an important event in Irish sporting history.

In just over a week the squad will line out in the Vuelta a España, marking the first time an Irish team has ever competed in one of cycling’s three-week Tours.

The squad is yet to announce the line-up for the race, but it is likely that there will be at least one Irishman on board when the race starts in Nimes, France, on August 19th.

With Martyn Irvine still rehabilitating after fracturing his hip earlier this year, either Conor Dunne or Matt Brammeier are the choices.

Also going well of late is the Dutchman Michael Kreder, fifth and ninth on stages of the Tour de Wallonie plus ninth on Thursday’s opening stage of the Arctic Race of Norway. Others will also be in consideration for what will be a very important appointment for the team.

In order to mark its participation in the race, the team announced on Thursday that it will use a special edition jersey in the event.

Aqua Blue Sport general manager Stephen Moore said it is a way of showing thanks to the race for giving it a wildcard invite.

“We are all incredibly honoured to be taking part in La Vuelta and to mark the occasion we have decided to make a one-off white jersey,” he said. “We are really looking forward to showing our new colours.”

Meanwhile Irish sprinter Sam Bennett has been given a contract extension by the Bora-hansgrohe team. It confirmed its line-up for the Vuelta in recent days and Bennett will not be taking part.

Having ridden the Giro d’Italia earlier this season and gone agonizingly close to a stage win, he will have an alternative build-up to the World Championships in September.

General manager Ralph Denk said the Irishman is an integral part of the team.

“It was very important to me to extend our relationship with Sam Bennett,” he said. “With his win in Paris-Nice he proved again to be one of the fastest riders in the peloton, and we think there is still room for improvements.”