Annalise Murphy leads after first round at Italian Eurosaf Cup

Dún Laoghaire single-hander had wins in races four and five 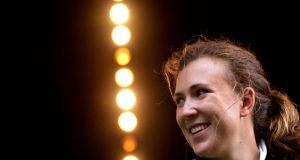 Annalise Murphy leads the first round of the Eurosaf Champions Sailing Cup after four races on Lake Garda.

A delighted Annalise Murphy leads the first round of the Eurosaf Champions Sailing Cup after four races on Lake Garda this morning.

Murphy hit form on Wednesday bouncing back from a ninth in race one to score a first and second and followed it with two more wins in races four and five yesterday. Admittedly this 44-boat affair is not at World Cup level but it is nevertheless a strong fleet and the Dún Laoghaire single-hander needs to prove herself after crashing out of the gold fleet of the World Cup in Hyères a fortnight ago.

The new Eurosaf series concept has been designed to complement ISAF’s World Cup and this week is its first outing.

In other Olympic sailing news, Murphy’s older sister aims to join Annalise on Rio’s Guanabara Bay in three year’s time in the latest Irish women’s skiff campaign to be announced. Claudine Murphy has teamed up with former British trialist Andrea Brewster (who qualifies for Ireland through her Irish mother) in a bid for the single Irish place against Belfast-Dublin campaigners Tiffany Brien and Saskia Tidey.


Kenefick finishes
Royal Cork solo sailor David Kenefick finished the 30-boat Solo Concarneau in 15th place and second Rookie late on Wednesday. It was a 300-mile race along the French coast and with just three weeks to the start of the Solitaire du Figaro in Bordeaux Kenefick, the sole Irish entry, reports good progress. “I was happy with my speed . . . I was happy with the way I managed the boat,” he said last night.

An eight-sailor squad will represent Ireland at the ISAF Youth Sailing World Championships in Cyprus in July. Dún Laoghaire’s Finn Lynch, the silver medallist from last year’s event, has been beaten for a place in this year’s team by Strangford’s Robbie Gilmore. (The full team is listed in Sports Round-up below).

After a series of trials for the World and European Optimist Championships the Irish squad was selected afer the final trial in Royal Cork last weekend. Twins Johnny and Harry Durcan were runaway winners for two of the five World Championship places (the team is below).

There will be a cap of 60 entries for Calves week in west Cork from August 6th-9th.