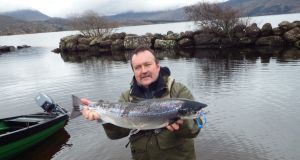 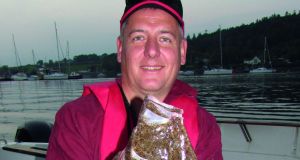 Paul Twomey with the first specimen brill since 1996. The fish weighed 2.04kg (4.50lb) and was caught in Cork Harbour

The first salmon of the 2016 season was caught last Monday at 10.50am by angling guide Neil O’Shea on Lough Currane in Waterville, Co Kerry. The fresh fish weighed 4.5kg (10lb) and taken while trolling a Rapala lure from “The Bridge” on the eastern side of the lough.

This is the first occasion for Currane to record the first salmon of the New Year in Ireland.

“Conditions were very good although, while our season started the previous day, it was too windy to venture out,” he said. O’Shea also has the distinction of catching the first Currane salmon on opening day in 1986 and 2009.

At time of writing, the Drowes still awaits its first salmon. “The river has, at last, returned to normal levels, and with an influx of anglers at the weekend, we are hopeful for our first fish,” proprietor Shane Gallagher said.

There are superb salmon fishing lots including some prime beats in Norway, along with most major Irish and UK fisheries. In addition, this year’s auction has extraordinary value on a number of interesting shooting and stalking lots.

Bidding began on January 14th and will close on February 14th. For details of all lots and how to register your bid, visit: atlanticsalmontrust.org/ auction.

Patrick Gibbons is a commercial lawyer with experience of life and pension insurance who spent 15 years in charge of compliance and legal functions. Staff in the Connemara District voted for Seán Coady as worker representative in line with section 13 of the Fisheries Act.

There are two more vacant positions on the board and these are in the process of being filled through the public appointments service.

While it is a legal requirement, the information gleaned from catch details allows the agency to develop a sustainable fishery management policy.

Art Niven, freshwater biologist, said: “Catch returns are used globally as a fishery management tool. A lot of anglers are not aware that they must make a return within 21 days of the end of the season.”

Development manager Lionel Knobbs said: “We are also interested in returns from coarse anglers. The data is important to identify where fish are being caught, species, sizes and numbers actually fishing.”

To make your return, complete table on the original licence and send with any unused tags to Loughs Agency, 22 Victoria Road, Prehen, L/Derry, BT47 2AB. If you have lost your licence, download a form from loughs-agency.org.

If agreed, the areas earmarked will help safeguard the habitats of internationally important harbour porpoise and seabirds including Manx shearwater, red throated diver, puffins and terns.

Along with other European countries, Wales has Special Areas of Conservation and Special Protection Areas and the proposed new areas will add to this network, called Natura 2000, which aims to conserve biodiversity across the EU. The consultation runs to April 19th, and decisions will be made by the Welsh Minister for Natural Resources.