Race will be 1200 kilometres long with 21 categorised ascents, including two in Donegal 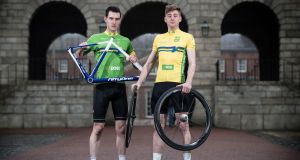 Irish riders Ronan McLaughlin and Eoin Morton pictured at the launch of the 2017 An Post Rás which will begin on Sunday May 21st at Dublin Castle and finish on Sunday May 28th in Skerries. Photo: Dan Sheridan/Inpho

Beginning in Dublin Castle and spending a total of five days in Donegal, the route of the 2017 An Post Rás will see the riders take on two of the toughest climbs in Ireland.

The details of the 1200 kilometre battle were launched in Dublin’s GPO on Tuesday. There will be 21 categorised ascents in all, including the first category Mamore Gap on stage four and Glengesh two days later. Those will likely wreak havoc in the peloton, while the race’s four category two climbs will also make things difficult for the international field.

The race least visited Donegal in 2012 amid a heatwave, and featured a very dramatic finish on stage four. Then An Post-rider Ronan McLaughlin was clear on a solo break for 70 kilometres but was caught 100 metres from the line in Bundoran.

The Donegal rider was in attendance at the launch and while he is no longer racing overseas, he said he is still aiming for success. “I went very close in Bundoran in 2012 but it just wasn’t to be. So the aim of winning a stage in Donegal is still on my mind.”

The race begins on Sunday May 21st with a 146.1 kilometre race from Dublin Castle to Longford. It features one categorised climb plus three bonus sprints, while the following day’s 142.9 kilometre race to Newport lacks any hills but has another trio of intermediate sprints.

Stage three is slightly longer at 149 kilometres and takes the riders north to Bundoran. From there things get hillier: the following day has five climbs along the 151.8 kilometre route to Buncrana. These include the category two Old Mountain and Pinch Mountain prior to the gruelling Mamore Gap, one of the steepest climbs in the country.

Once over the top just 14 kilometres remain and a difficult run in from there plus an uphill finish may well see a change in race leadership.

Stage five to Dungloe is flatter with just a pair of category three climbs, but is the longest of the race at 181.2 kilometres. Campbell says the distance will be a big obstacle. So too constantly undulating roads, which may not appear difficult on paper but which will drain the already fatiguing riders.

The big mountains return the following day with six categorised climbs littered along the 132.1 kilometres to Donegal town. The second of these is the feared Glengesh Pass and while it comes just 60 kilometres into the day, a smattering of other ascents afterwards including the category two Maeenavaghran may prevent a regrouping.

“I think that there will be a lot of riders not getting back on after Glengesh because of those later climbs,” said Campbell. “It’s going to be a tough day.”

Stage seven to Ardee is 167.3 kilometres in distance and lacks any categorised climbs, but will likely feature aggressive racing by those trying to displace the race leader. Their final chances will come on stage eight to Skerries, with this shortest stage featuring six ascents.

The first of those, the category two Bellewstown climb, comes within the first hour of racing and is the ideal platform for a breakaway move. They will try to build a large enough buffer to hold off the chasing peloton on the three 13.8 kilometre finishing circuits, with the ascent of the Black Hills keeping the pressure on all the way until the closing minutes of the race.

“I think it will be a very exciting edition of the race,” said Campbell. “We were in Donegal for several days five years ago and things were very dramatic there. There was also stunning weather, which we hope will happen once again.

“Donegal is great racing country and has fantastic roads. We are getting great support from everyone there and are really looking forward to making our return.”