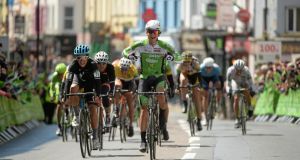 One day after taking the race leader’s yellow jersey due to his win on stage one of the An Post Rás, Italian rider Francesco Reda is heading home due to his disqualification from the event.

The Team IDEA 2010 ASD rider initially crossed the line in Tipperary to the fore of a front group led in by An Post Chain Reaction rider Aaron Gate, but soon after the finish the news emerged that the race commissaires were having a serious discussion about his actions towards the end of Monday’s second stage.

Chief commissaire Danuta Macialek confirmed to the Irish Times that after puncturing with 20 kilometres to go, Reda received unauthorised help in returning to the peloton.

“He got a very irregular assistance from his car.,” she said, referring to holding onto the vehicle. “He was warned that this was irregular, but didn’t stop. That is why we had to disqualify this rider.”

Reda, who previously served a ban after refusing a doping control in February 2013, and his manager Alberto Elli protested, but their appeals were dismissed. Elli refused to comment afterwards to the Irish Times, but told the race organisation that he was withdrawing the team and going back to Italy.

Austrian rider Lukas Postlberger had finished just behind Reda on Sunday’s opening stage, the duo opening a 55 second gap over 13 other breakaway companions inside the final hour of racing. He took over at the top on Monday afternoon and said that the change was not foreseen.

“I didn’t expect it, the Italian got penalised,” he said. “It is his fault and I am the lucky guy now.” He said it would be difficult to defend the lead but he and his team-mates would try to do so.

These opened a lead of over six minutes, making McCrystal race leader on the road. The latter eventually pushed ahead alone inside the final hour and had almost four minutes with 25 kilometres to go. However his superb effort faded on the final climb and he was caught with five kilometres left, finishing in a 29 man group led in by the Kiwi Aaron Gate.

The latter’s team manager Kurt Bogaerts celebrated the early success of the Irish team, and said that it would continue to chase stage wins while also focussing on the general classification.