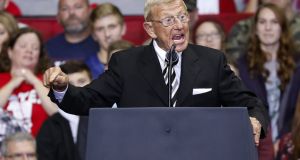 Chet Lacheta was an 18-year-old offensive lineman out of Illinois living the dream in his first year at the University of Notre Dame in 1990. At spring training, he got thrown in to play against the starting team. A huge opportunity but, still recovering from recent injury and illness, he found the scrimmage to be tough going. Afterwards, Lou Holtz, the iconic coach who had led the college to a national title just two years earlier, offered him an assessment of his performance.

“He called me a coward and he said I shouldn’t bother to come back to school in the fall [autumn],” said Lacheta. “He grabbed my facemask and then he purposely spit at me. The other players knew what happened.”

1 Covid-19: State moves to Level 5 for six weeks with hopes of ‘meaningful’ Christmas celebrations
2 Life under Level 5: What will the next six weeks look like for Ireland?
3 Bill that overrides UK’s Brexit deal denounced in House of Lords
4 High levels of microplastics in infant-feeding bottles released during formula preparation
5 ‘I was living in a boat in remote New Zealand mostly unaware of the Covid-19 crisis’
6 Six-week Level 5 restrictions will cost €1.5bn and cost 150,000 jobs - Varadkar says
7 Dr Muiris Houston: ‘For me, the most shocking Covid-19 statistic of all is this…’
8 With dramatic U-turn, Government weakens its own authority
9 Trump says public sick of coronavirus ‘idiots’ like Fauci
10 Residents support elderly man in bid to resist notice to quit apartment
11 Nphet letter predicts 50 daily cases by Christmas after six-week lockdown
12 Covid-19: Schools and colleges to remain open during Level 5 restrictions
13 Fintan O'Toole: System for making decisions on pandemic doesn't work
14 Teacher unions concerned at schools staying open amid lockdown
15 Doctors’ letter calls for new strategy to ‘co-exist’ with Covid-19
16 The Irish Times view on the new Covid-19 restrictions: Admission of failure
17 US election: The New York enclave that exposes media myths about Trumpism
18 Taoiseach: Following new Covid-19 measures will offer ‘respite’ at Christmas
19 Stevie Nicks: ‘If I had not had that abortion, there would have been no Fleetwood Mac’
20 Mother and baby home documents should not be ‘sealed’
21 Sinn Féin tells State watchdog UK rules apply to €4m donation
22 ‘Brexit buster’ can ‘dramatically’ increase direct ferries to Europe
23 The Offload: Spectre of doping hangs heavy over South African rugby
24 Rory O’Connell: ‘I didn’t get to know my sister Darina until I came to Ballymaloe’
25 Rock art over 4,000 years old found by Sligo community project
26 Reasons to be optimistic for a Covid-19 vaccine by Christmas, says expert
27 Coronavirus: Cases in State pass 50,000 as 1,031 new cases reported
28 These lemon cheesecake bars are a little slice of sunshine
29 Fifty-six Covid-19 cases linked to man who failed to isolate after trip abroad
30 Covid-19 has shown that much of ‘normal’ life should have been binned years ago
31 Proposal for 14-storey tower beside Victorian market
32 75 reasons to be cheerful – by Mary McAleese, Chris de Burgh, Sinéad O’Connor and more
33 Inquest into death of girl (17) in Mayo Covid ward stopped over rule breach
34 Behind the scenes: How a weekend of talks and briefings brought us back to lockdown
35 Erectile dysfunction or performance anxiety? This is not about sex, it is about shame
36 Rome may have done me a favour by removing me from priestly ministry
37 Covidiots of all ages are giving two fingers to everyone
38 Level 5 restrictions risk pushing economy into double-dip recession
39 Boats search for ‘tired’ dolphin Fungie ‘missing’ almost a week
40 ‘Lockdown lobby’ needs to explain why this time would be different
Real news has value SUBSCRIBE