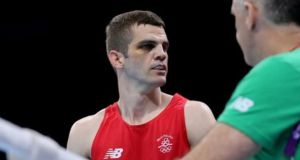 Irish southpaws Adam Nolan and Joe Ward advanced to the quarter-finals of the European Elite Championships in Samokov, Bulgaria on Tuesday.

London 2012 athlete Nolan produced a massive performance to shock Russia’s No. 1 seed Radzhab Butaev in the welter class and Ward dominated Georgian light-heavy Nikoloz Selchniashvili, who received two public warnings in the second round for hitting with the inside of his glove and using his elbow.

Butaev, who earned a quota place at Rio 2016 through the World Series of Boxing (WSB) this year, was favourite to progress against Nolan, also a WSB boxer with Italia Thunder last season.

But Katie Taylor’s team-mate at the Bray BC turned in probably the best performance of his career to post a 29-28,29-28.29-28 decision against his vaunted opponent.

Ward, who won European Elite gold in 2011, was rarely troubled by anything Selchniashvili did legally en route to a 30-25,30-24,30-25 landslide against an opponent he beat in a multi-nation Junior final in Baku, Azerbaijan in 2009.

If any of the Irish quartet win tomorrow, they will guaranteed at least bronze and secure outright qualification for October’s World Elite Championships in Qatar which is an Olympic qualifier.

“It will be a big day for the boys tomorrow. Adam and Joe were top class today, top class and we have four going for the medals,” said Irish team manager Peter O’Donnell.