‘A woman’s best place is in the kitchen,’ Tyson Fury says 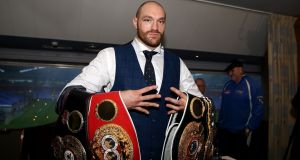 Tyson Fury finds himself amid a sexism controversy after comments he made about Jessica Ennis-Hill. Photo: Simon Cooper/PA Wire

Tyson Fury will not be removed from the shortlist for BBC’s Sports Personality of the Year award despite appearing in an online video in which he says Olympic champion Jessica Ennis-Hill “slaps up good”.

The new world heavyweight champion is shown in footage on YouTube giving his views on women and says: “A woman’s best place is in the kitchen and on her back, that’s my personal belief”.

Fury also gave his opinion on women in boxing, in which he spoke about the ring girls who “give me inspiration, when I’m tired and I see them wiggling around with their round two, round eight (cards)”.

The 27-year-old beat Wladimir Klitschko in Dusseldorf on Saturday night to secure the WBA, IBF and WBO heavyweight belts.

After the win Fury was installed as one of the favourites to win BBC’s annual Sports Personality award having been selected by a 12-person panel.

He has courted controversy in the past and was criticised for airing his views on homosexuality in the lead up to his title shot.

An online petition had already collected more than 40,000 signatures demanding he is removed from the BBC shortlist before the latest YouTube video had been widely seen, but the network does not intend to alter the initial selections.

A BBC Spokesperson said: “The Sports Personality shortlist is compiled by a panel of industry experts and is based on an individual’s sporting achievement – it is not an endorsement of an individual’s personal beliefs either by the BBC or members of the panel.”

Fury himself tweeted to say he did not want to win the award: “Hopefully I don’t win BBCSPOTY as I’m not the best roll model in the world for the kids, give it to someone who would appreciate it,” he wrote.

The footage has a publication date of November 25th and, when asked his opinion on women in boxing, Fury focused on the ring girls rather than athletes.

“I think they are very nice when they’re walking around that ring holding them cards,” he said.

“I like them actually, the give me inspiration, when I’m tired and I see them wiggling around with their round two, round eight . . . I think women in boxing is very good.”

When pushed further on women actually boxing, Fury claimed he is “not a sexist”.

“It’s up to everybody what they want to do,” he said.

“But I believe a woman’s best place is in the kitchen and on her back, that’s my personal belief. Making me a good cup of tea, that’s what I believe.”

Fury immediately laughed off the comment but is also asked about British heptathlete Ennis-Hill during the hour-long interview.

“That’s the runner isn’t it?” he replied.

“I think she’s good, she’s won quite a few medals for Britain, she slaps up good as well, when she’s got a dress on she looks quite fit.”

Ennis-Hill, who returned to action this year after giving birth and overcoming injury, is also on the 12-person shortlist for the BBC award – which will be handed out in Belfast on December 20th.

Fellow athletes Mo Farah and Greg Rutherford are up for the gong, as are cyclists Chris Froome and Lizzie Armitstead as well as Britain’s Davis Cup winner Andy Murray.