Álvarez digs in to deny Golovkin in controversial split draw

Pound for pound kings breathe life back into boxing in a brutal, beautiful Las Vegas bout 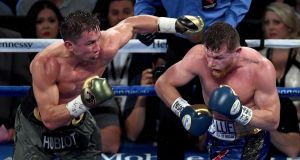 The sometimes eccentric Adalaide Byrd gave a palpably closer fight 118-110 to the Mexican, Dave Moretti had it a more sensible 115-113 to Golovkin and Don Trella had enough evidence to justify a 114-114 draw. And that glow of satisfaction at ringside might have been the smiles of the TV executives and casino heavyweights who know they will now do it all over again.

Golovkin keeps his WBC, WBA and IBF belts, as well as the lesser IBO title, and Álvarez is still the Ring’s acknowledged king as well as the lineal champion, by virtue over his win against Miguel Cotto in 2015. The last undisputed world middleweight champion was Bernard Hopkins, the business partner and one-time tormentor of Álvarez’s promoter, Oscar De La Hoya.

But the 22,358 fans in the T-Mobile Arena were not interested in that history; they wanted new stuff. They wanted a definitive answer to the question: who is the best middleweight in boxing?

The answer should have been Golovkin, but not by a lot: seven rounds to four, with one even. A couple of those rounds were close and tough to call. And the exchanges were often so intense it was difficult to separate them.

Yet that hardly excuses the deplorable score of Byrd, who is an experienced official in Nevada. This was not a good night for her. It was, however, a terrific night for the sport.

Even though Golovkin had the belts, Álvarez held the cards when they divided up the guaranteed loot: $5 million to $3 million, and he has De La Hoya to thank for that. The promoter insisted beforehand this was “not about the money”, but “a history fight”. Up to a point – and certainly when they were throwing and ducking leather, the only thoughts on their minds were survival and victory, in competing levels of intensity.

De La Hoya also predicted “eight or nine rounds of hell” for both men. He was not wrong there.

There was the most cursory glance between the fighters when they touched gloves, but the circumspection lasted only as long as it took Álvarez to fire off the first sharp blows and edge the first round. A rhythm had already been set in place: Golovkin stalking behind the stiffest jab in the division and Álvarez waiting for gaps. Each brought contrasting but meshing skills, in addition to excellent records.

With clinical ruthlessness, Golovkin had shredded the ambitions of his 37 previous opponents, among them Matthew Macklin in 2013, Martin Murray two years ago and, most recently, Kell Brook last year. He also destroyed Willie Monroe Jr, who lost to Billy Joe Saunders in London on Saturday in what appeared from a distance to be 12 scrappy and sometimes dull rounds for the unbeaten British middleweight’s WBO title.

As for Álvarez, four British challengers have tried and failed against him: Matthew Hatton and Ryan Rhodes (back to back in 2011 at light-middle), Amir Khan – so viciously knocked out in this ring last year – and Liam Smith, whom he stopped in nine rounds in Texas a year ago.

But the name that stands out on the Mexican’s card is that of Floyd Mayweather Jr, against whom all fighters at or around these weights must be judged. Álvarez, despite his early start in the professional sport at 15, was not good enough when they fought in 2013 to break down the fortress Mayweather had built around him. He is a different customer now.

Álvarez’s quicker fists established early dominance, while four-belt champion Golovkin took a while to find his range and tempo. Eight years younger and a split-second quicker, Álvarez walked on to a heavy right in the third but the natural counter-puncher was beating the knockout artist to the punch.

Golovkin warmed to his work in the fourth and Álvarez unwisely took a peppering on the ropes, shaking his head defiantly. Maybe the concussive power of the Kazakh’s fists were doing the job without the spectacular buzz of some of his previous work, but Álvarez was clearly feeling the weight of them, as so many before him had.

The challenger’s head now snapped back with monotonous regularity, and his hand-speed dipped around the halfway mark. Álvarez’s judgment also blurred as he continued to take needless risks.

Golovkin, having rediscovered the snap and energy that had drained from him in his last fight against Daniel Jacobs, was the boss again. Álvarez’s face was growing puffy, but his pride was solid. Constantly on the back foot, he had his right hand cocked for an equaliser. It did not always come when he wanted it to.

The younger man’s swings were growing wild and weary, and his legs were as heavy as his heart. Golovkin kept his shots short and disciplined, although he walked on to a decent uppercut near the end of the eighth, which he still won clearly.

What had earlier been a challenge was now a routine exercise in pain dispensing for Golovkin. When Álvarez decided to trade, it was the champion who reaped the dividend, but the Mexican got home with a single right hand that turned his opponent’s jaw sideways in the ninth – the sort that levelled Khan here in centre ring.

Álvarez steeled himself for a rearguard assault to save the fight. But Golovkin was the bigger man, and fresher. Yet the Mexican would not be denied. He found his target and staggered his man with a tremendous right in the tenth.

Although the last two rounds were as close as they were frenetic, it was Golovkin who held his nerve.

Golovkin’s trainer Abel Sanchez, echoed the wider sentiment when he said ringside, “No surprises. We knew going in it was going to be a war. Canelo was very resilient.”

Golovkin, in his charming and truncated English, described the fight as, “a drama show”, adding, “Of course I want the rematch. This was a real fight. Look, I still have all the belts. I’m still the champion.”