(One of) my favourite sporting moments: Sergi Roberto’s right leg completes a miracle

Joanne O’Riordan: Picking one was impossible so I’ve divided it into men and women 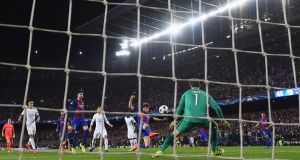 Sergi Roberto of Barcelona scores their sixth goal past goalkeeper Kevin Trapp of PSG during the 2017 Champions League Round of 16 second leg match at Camp Nou. Photo: Laurence Griffiths/Getty Images 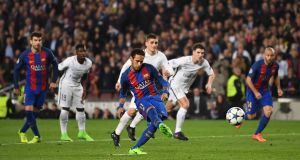 Let me be as dramatic as I possibly can for a moment. I have met Masters champions, I have been near the greatest footballer, dare I say athlete, to ever grace this planet. I have looked Roy Keane in the eye and not turned to stone (although I did pee myself a little). I spoke to the United Nations, and I spoke to Ladies Football All-Stars at the infamous all-star event. In fact, I was even in Anfield, right on the touchline with Trent Alexander-Arnold when he took that corner against Barcelona. If only Suarez turned his head rather than berate the referee about the corner.

But first, I have to rewind.

Like all moody 20-year-olds, I decided I was destined to travel the world and see the sights around me. I’d discover myself (whatever that means) and mostly take some much needed time out. Like all Z Listers, I was on the road for too long, with little to show for it.

So, travelling the world was compromised to participating in an Erasmus Program and head for the Yorkshire Hills. I watched tapes of Mick McCarthy to fit in with the cool kids of York and was all prepared for the adventure of a lifetime.

But funnily enough, initially, I hated it. There was nothing wrong with University of York, Alcuin life and Yorkshire people really did over ask “you alright, love?” As a Cork person, the drollness brought out my sing-song accent, and I was a total outsider.

As my friend from home said, if you can’t find the weird housemate, you’re the weird housemate. Despite five other girls living with me, two of who were from China, the girls labelled me as the mysterious international student. I watched football matches, let out some roars, and carried on as if this was a healthy life.

I actually devised a breakout plan with a friend, weirdly enough. I was going to fly home to attend Kilcar v Glenswilly, my parents would never suspect a thing, and then I was going to live in Belfast after. Choosing Belfast was simply because like all good college students, I asked my parents weekly for money.

Like everything in life, your breakout plans are foiled, you go back, adjust and get used to this new life. The girls got used to me, and I got used to them. In fact, we became the best of friends, and they knew in order to see happy Joanne, FC Barcelona had to win. Again, all normal human behaviour.

March 8th, 2017 probably tested any relationship like no other. The PA I had, Lauren, did not get football and politely suggested I watch this PSG game solo. It was for the best, we all agreed. At 7.45pm, nobody would talk to me for a week, and I’d be fed through a flap door in my bedroom door.

And then, boom, Luis Suarez got the first goal. I started to breathe heavy, and I knew I needed divine inspiration.

Oh my god, OG, Iniesta with that sexy back pass. I needed more help. Suki, Chinese housemate number one, said she would not say the rosary with me. And then, the king of bottling Edison Cavani scored. If only Suki said that decade of the rosary.

My phone lit up from Ayesha, telling me my room was as silent as a morgue. I wish I ran away to that Kilcar v Glenswilly game now. Thomas Meunier just fell into Neymar… is that a… OF COURSE, IT’S A PENALTY OH MY GOD I MIGHT HAVE A STROKE.

Sweet Jesus, Kevin Trapp gave up on that freekick goal, THANK YOU NEYMAR, I LOVE YOU. SUAREZ WAS DEFINITELY FOULED, DEFINITELY A PENALTY… NOW, YES, NEYMAR BURIED IT.

Now I’m sweating in a room all by myself, and my left arm is going numb. Barcelona might make it to the end, but I’m not sure I will.

TER STEGEN WINS A FREE OUTSIDE HIS BOX, MOTHER OF GOD. NEYMAR, PLEASE, WHY ARE YOU DIPPING, SHIMMYING, CROSS, ROBERTO!!!!!

I will openly admit I blacked out from crying and screaming. Lauren, my PA, burst down the door but I was an inconsolable mess. Just screaming at my computer, babbling some nonsense. In peak Bradford fashion, I’m pretty sure my housemate, Ayesha asked was I alright in the dullest manner ever. How could I be alright when I witnessed the greatest comeback ever?

Luis Enrique ruptured ligaments in his knee celebrating, and I think I should’ve put myself on a list for a heart transplant. I rang everyone who I felt should share in my celebrations. Friends, siblings, parents, everyone received various outbursts throughout the night. To quote Lauren, I watch that goal the same way first-time fathers stare at newborn babies. Maybe my friends were right, I definitely was the weird housemate.

Sergi Roberto’s outstretched right leg is etched in my mind forever. Even seeing the picture, I completely well up, rerun the goal in my head to Celine Dion’s My Heart Will Go On. I initially told the house I was going to go to Barcelona and try to touch Sergi Roberto’s right outstretched leg. They were right, it was creepy, and I should just order a poster instead. I ordered 12.

That game probably cemented my status as the weirdo in the apartment, but, bizarrely, in an apartment I had resented being in, it started to feel like home. Yes, Sergi Roberto’s outstretched right leg didn’t concoct that level of magic, but it was one of the first time everyone in the apartment was in my room to watch Joanne cry.

But sport does that in a way few aspects of our society can. It can unite us, divide us, inspire us, belie us, make us fall in love, fall out of love. It cuts through the cynicism and quite literally stops your heart sometimes.

And more than anything, in a time where I was isolated and feeling alone, it made me smile and cry happy tears for about a week while yelling nonsense at my parents, housemates and anyone that would listen.

The stoniest and iciest of hearts would all feel bad for Unai Emery and his PSG players. But really, it was Luis Enrique and his team that became symbols of a world needing unity. Because, after all, when all is lost in the world, and everything seems to go awry, that is when you are more dangerous and more empowered. With everyone working towards one goal, or six goals, then anything is, in fact, possible.

FC Barcelona made comebacks hipster, then suffered numerous psychologically decimating comebacks against them. But the sentiment is still there.

When all is lost, and there is nothing left to fight for, maybe you really are more dangerous and powerful.

You can read Joanne O'Riordan's other favourite sporting moment here: On the pitch as Cork ladies win the big one

1 Worst sporting moment: White knuckle ride on a hate-filled night at Windsor
2 Acute disillusionment the only response to growing FAI debacle
3 Worst Sporting Moment: Mighty Nijinsky misses moment of triumph
4 Bundini Brown: The man who invented ‘float like a butterfly, sting like a bee’
5 Irish roots with the bit of Jo’burg dog: Curtis Campher has arrived
Real news has value SUBSCRIBE
Here is your handy guide to sport on television this week