Nizhny Novgorod’s pubs are a far cry from Irish counterparts 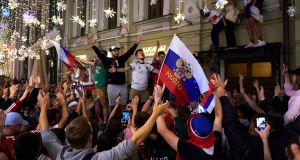 What to do in the Russian city of Nizhny Novgorod – a place closed off to outsiders until 1989 – when the host country is playing 1,100km away? Go to the pub, of course. Keith Duggan is in the city on the banks of the River Volga for Argentina’s meeting with Croatia tomorrow and yesterday he went along to some of the city’s bars to watch Russia’s win with the locals and see if World Cup fever had gripped the city. From St Petersburg, where Russia saw off Egypt 3-1 to all but secure their place in the second round, Ken Early reports on a stunning victory for the hosts and a first two games which few people expected.

Just under 2,000km south, Emmet Malone has been in the Black Sea resort of Sochi for the last week where the locals say they are fearful of being left behind by president Vladimir Putin in a city that was once thriving and where Joseph Stalin himself used to own a villa. The gleaming sports complexes built for the 2014 Winter Olympics tell one side of the story but the rugged and slightly rundown seafront paints a different picture altogether.

1 Coronavirus: More ‘striking’ evidence BCG vaccine might protect against Covid-19
2 Last couple in paradise: The honeymooners stranded in the Maldives
3 Boris Johnson spends night in intensive care after coronavirus symptoms worsen
4 Genetics shed light on origins of Irish strains of Covid-19
5 Una Mullally: Leo Varadkar’s mask drops again
6 Larry David’s quarantine: ‘I’m reading Woody Allen’s memoir. It’s fantastic’
7 Fintan O'Toole: Crisis management is what the State does best
8 Donald Trump’s clown car administration has put the fear in all of us
9 Coronavirus: Why are men twice as likely to die as women?
10 Reality Bites – Tales from the new normal: Conor McDonald
11 Beyond the call of duty: Community gardaí help woman move her mother to safety
12 Coronavirus: Property rental in the jaws of the epidemic
13 Eccentric Thai king’s flying visits ensure a colourful German lockdown
14 Australian court quashes Cardinal Pell’s child abuse convictions
15 A Michelin-starred chef’s recipe for a simple soup with big flavour
16 Britain's supermarkets wrestle with coronavirus demand conundrum
17 John Delaney’s profligacy haunts FAI again as Mick McCarthy departs
18 Letter to grandad who died from Covid-19: 'I'm proud of my future because I can be like you'
19 Restarting Ireland: When and how will we ‘get back to normal’?
20 Crack on: Where to order an Irish artisanal Easter egg in time for Sunday
21 Coronavirus: Public urged to stay at home for Easter
22 Gerry Thornley: Global pause allows rugby to tidy up the breakdown
23 Irish doctors on getting Covid-19: ‘In 90 minutes, I deteriorated quite rapidly’
24 'It is a scary time' - the nursing homes battling coronavirus clusters
25 ‘It’s just stuff’: Doctor leaves all possessions behind in Australia to return to work in Ireland
26 ‘Dad got the Spanish flu’: Clonmel man (104) sees historic lessons
27 French luxury groups U-turn on state support for jobs
28 A doctor writes: Where are all the non-Covid-19 patients?
29 Boris Johnson’s deteriorating health comes as shock at Westminster
30 My favourite sporting moment: When Manchester United reached the promised land
31 Teaching children the main stress source for families adapting to restrictions
32 Coronavirus: 16 more people have died in Republic as public urged to ‘have patience’
33 Coronavirus response: Air passengers could lose refund right under Government plans
34 How to remove shellac and gel nail polish at home
35 Consultants want private business exempt from national effort to save lives
36 I want to change my will quickly in case I fall ill. Do I need a lawyer?
37 Unable to work out? ‘Muscle memory’ may help you keep fit
38 ‘No point’ in coalition with FG-FF without two smaller groupings
39 Staff in Dublin and Cork airports receive profit share and bonuses for last year
40 Sir William Gregory was detested for his role during the Irish Famine
Real news has value SUBSCRIBE