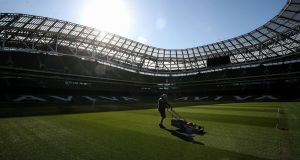 Dr Éanna Falvey believes there will be competitive rugby before the end of the calendar year. Photograph: Inpho

The GAA has said it still intends on playing this year’s club and intercounty championships, but the latter will not take place until at least October. In a statement released on Wednesday evening the association asked intercounty teams to stand down in the meanwhile, and confirmed the creation of a committee to advise on return-to play protocols after the Covid-19 lockdown. They are expected to file a first report quite quickly. Questions however have been raised as to why GAA players can’t train in small groups - with Wexford hurling manager Davy Fitzgerald disappointed with the decision to keep GAA pitches closed until July 20th: “I just think it’s a disappointment that parks can be open and the government say it’s okay for people to exercise away but the GAA won’t trust their players to be able to go into the fields in groups of threes and fours, keep their distance and do their bit of training together. I would actually trust them to do that.”

Dr Éanna Falvey, World Rugby’s chief medical officer, believes there will be competitive rugby before the end of the calendar year. In an interview with Gerry Thornley he explains it will most likely begin with domestic provincial or club games before progressing to Test match rugby. “I wouldn’t be surprised if there is quite a bit of competitive rugby and I would say that we are probably going to get cleverer in how we can monitor players,” explains the doctor who co-authored World Rugby’s guidelines for a return to training and to play released earlier this week.