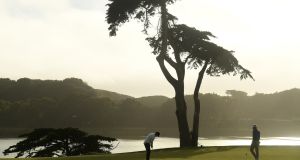 Paul Casey putts as Ian Poulter looks on as they play the 17th during the first round of the 2020 PGA Championship at TPC Harding Park in San Francisco, California. Photo: Harry How/Getty Images

It’s been a long time coming but the first Major of the golf season got off to a fast start last night as Jason Day and Brendon Todd shot opening round of 65 to share the lead at the US PGA but Shane Lowry, Rory McIlroy and Tiger Woods all remain in the hunt. Since winning the British Open 13 months ago, Lowry has had to wait a long time to get the Major juices flowing again but he did so with a very nice start on Thursday, signing for a two under par round of 68. That was the same score on the opening day for Woods who is going in search of his 16th Major title while McIlroy, who is looking to win his fifth and first in six years, looked to be in trouble early on but rallied to finish the day within five of the lead. Elsewhere, at the English Championship on the European Tour, Cormac Sharvin took sole possession of the opening round lead with a stunning 63.

On to rugby and Ireland head coach Andy Farrell knows the upcoming hectic autumn schedule will force him to spread the playing net wide and adapt to the high volume of matches. Speaking yesterday, Farrell said “it is going to be a completely different kettle of fish for ourselves; it could be from the off if Ulster and Leinster get into that final and win that final. We could be picking from two provincial teams or maybe three or, unfortunately, we might be able to pick from four.” Meanwhile, Farrell also spoke about Johnny Sexton and how his captain, who looks to have beefed up during the break, has been doing a lot more than just hitting the gym. The Ireland captain has also been brushing up on his leadership skills and Farrell says he has been impressed with what he has seen so far. In England, Geordan Murphy is navigating Leicester Tigers through the choppy waters of the current pandemic and he tells Gavin Cummiskey how it has been far from plain sailing.

1 Prepare for six to nine months of Covid-19 restraints, warn health officials
2 Sean Quinn stunned at rebranding of Quinn Industrial Holdings
3 Róisín Ingle: How to eat out in a pandemic. Don’t do what I did
4 Speed and distance of Covid-19 droplets tracked by Mater researchers
5 Probate is changing: What does that mean for you?
6 ‘Therapy completely changed my life, once I gave it my all’
7 Fintan O’Toole: My father wanted to die and I promised to help him
8 Covid-19: Seventy cases in Cork traced to local pubs and restaurants in recent weeks
9 Graham Norton: ‘I wanted out, out, out of Ireland’
10 Gerry Thornley: South African sides would be a welcome addition to Pro14
11 Do headstands, clear out a junk drawer, have sex: 15 ways to re-energise your day
12 Liverpool crank up familiar brand of strangulation football
13 Will tracker mortgage be at risk if Ulster Bank closes?
14 No joy for consumer with a faulty Husqvana chainsaw
15 Ryan believes Coalition partners share his concerns over D’Arcy appointment
16 Dublin Aerospace takes over Flybe’s aircraft servicing base at Exeter Airport
17 Almost a third of Garda firearm discharges found to be accidental
18 Irish golf tourism faces ‘wipeout’ unless Covid travel restrictions eased
19 Government own goals are gifting the initiative to Sinn Féin
20 Olivia O’Leary: If you move to Carlow, there are things you’ll have to get used to
21 Coronavirus: More lab testing capacity may be needed, HSE chief warns
22 Irishwoman Adrienne Gormley joins N26 as chief operating officer
23 Susie Dent: ‘Jimmy Carr is incredibly rude to me. I took it as a compliment’
24 1,000,000 coronavirus deaths: global toll passes ‘agonising milestone’
25 Jürgen Klopp and Roy Keane clash over ‘sloppy’ comment
26 Manchester United make initial bid for left back Alex Telles
27 Rolls Royce Ghost: More than just a plaything for the rich and shameless
28 Ireland’s travel green list reduces to four countries
29 Great outdoors: Meet the teachers taking lessons beyond the classroom
30 Hello Eir, is anybody there? Four unhappy customers complain
31 More than 30 people queue overnight to secure property in Carlow
32 Three Ireland switches on 5G network around the country
33 Schools fear losing teachers due to Covid-linked pupil absences
34 Me & My Money: ‘Money can’t buy you happiness but it can make life a lot easier’
35 Risk of localised flooding as yellow warning issued for several counties
36 Ministers may delay ‘assisted dying’ Bill for special committee to consider issue
37 Liverpool maintain perfect start with win over Arsenal
38 Covid-19 upheaval points way to solving persistent inequality
39 Meet ‘friluftsliv’ – the new hygge for living outdoors
40 ‘I never suspected that, aged 29, I’d be lost’
Real news has value SUBSCRIBE