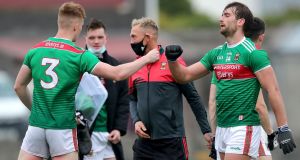 Mayo celebrate after their impresive win over Galway on Sunday. Photograph: Inpho

The fate of the GAA season is hardly pre-eminent in the priorities of today’s government meeting before the announcement of new national restrictions. But there is an underlying sense that it would add some element of colour and excitement to what promises to be the greyest and grimmest winter season in living memory. Mayoites glued to their television across the county on Sunday must have been licking their lips at the thought of what Mayo might do in this, the year of the silent All-Ireland. Their team dished out a 3-23 to 0-17 lesson to Galway to boost their Division 1 survival hopes. While Conor McKenna scored 1-2 on his return from AFL in Tyrone’s four point defeat to Donegal. Also on Sunday, Fermanagh were relegated from Division 2 following a two point defeat in Clare. They brought a much depleted squad to Ennis after failing in their bid to postpone the match due to a number of their squad testing positive for Covid-19.

Liverpool have been dealt a devastating blow after scans revealed Virgil van Dijk damaged an anterior cruciate ligament against Everton and requires surgery. Thiago Alcântara also had a scan on a knee injury suffered in the derby following a dangerous foul, but his injury needs to settle before the full extent of the problem is known. The Premier League champions are hopeful it is not serious. Ross Barkley’s late solo goal sealed a 1-0 win over Leicester for Aston Villa who have now won their opening four matches of a campaign for the first time since 1930 and climbed to second place in the Premier League. Earlier Gareth Bale made his return as Tottenham surrendered a 3-0 lead at home to West Ham. In his column this morning (Subscriber Only), Ken Early explains how Project Big Picture endangered the cushy position of ‘bottom 14’: “for the first time, the agitation of the richest clubs for a greater share of the rewards – a perennial theme of the Premier League era – came wrapped in share-the-wealth populism: let’s divert more of the money to the forgotten 72, at the expense of the pampered and flabby 14. Do the 14 have a convincing riposte?”

6 Michael McDowell: Time to wake up and smell the coffee over Sinn Féin

11 Kathy Sheridan: What was the purpose of Brian Stanley’s tweet glorifying mass killings?

13 Michael Harding: I got up close with a badger one night. I know he’s still out there

17 How to make my mother’s Punjabi mango pickle, the best in the world

20 ‘It has to stop’: Republican Georgia election official lashes out at Trump

22 Kia’s spacious Sorento is like a sittingroom on wheels

24 Lab-grown meat is approved for sale in world first

27 Fintan O’Toole: How does defence of trans rights become search for women to blame?

37 Pfizer/BioNTech vaccine: what you need to know about UK approval

38 Unemployment soars to 21% on foot of tougher Covid restrictions

39 Cavan priest will not be ‘dictated to by pagan government’

40 Kevin McStay: Beautiful chaos of All-Ireland to end in a Dublin-Mayo final