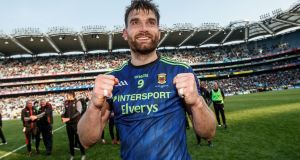 Mayo are League champions for the first time in 18 years, after they beat Kerry 3-11 to 2-10 in yesterday’s Division One final in Croke Park. It was a tight contest in which James Horan’s side got their noses in front towards the death thanks to a goal from the brilliant Diarmuid Connor. The Kingdom threatened a cruel comeback but a stunning save from Rob Hennelly - followed by a cool finish from Ciaran Treacy up the other end of the pitch - saw Mayo over the line. Keith Duggan writes: “Maybe, just maybe, it will come to symbolise Mayo’s appetite for the kill. It was their first league win since the millennium was young. And it was their first time to win a national final, after nine defeats, since that day in 2001.”

Prior to Mayo’s victory Limerick delivered an ominous message to the rest of hurling as they ended their own league title drought of 22 years with a dominant 1-24 to 0-19 win over Waterford. Aaron Gillane scored 1-9 in a supreme performance as his side became the first All-Ireland champions to go on to win the league since Galway in 1989, outside of Kilkenny. And more silverware could be in the pipeline, writes Ian O’Riordan: “And between the beauty and pain which comes after every final one thing is now certain:Limerick are the best hurling team in the land, and it’s beginning to feel like there is no stopping them.”