Mary Hannigan’s A to Z of the sporting year 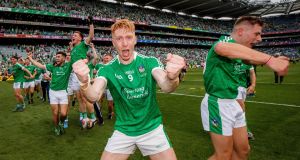 Cian Lynch and his Limerick team-mates celebrate their All-Ireland win over Galway at Croke park in August. Photograph: Ryan Byrne/Inpho

We waited 111 years for Ireland’s first victory over New Zealand, now we have two in two years. It’s becoming a habit. “As of now Ireland are the number one team in the world, so that result makes them favourites for the World Cup,” said a, eh, generous Steve Hansen after the game. No pressure, then.

Eoin Liston took a flight from Cardiff to Cork with a bunch of pals, one of whom tried to attract his attention by hollering “BOMBER!” Never a good idea on a plane. An alarmed air hostess had a word with the pilot. It was only when they Googled the Kerry legend’s nickname that they felt safe to continue the flight.

1 ‘I wandered around Dublin wondering: Is this what they call a capital city?’
2 Simon Coveney: Risk of nuclear catastrophe is unacceptably high
3 Teenage boy dies at Powerscourt Waterfall in Co Wicklow
4 John Hume’s socially distanced send-off a fitting end to the life of a ‘great servant’
5 Gardaí surrender 13 people to Polish police
6 Irish in Canary Islands: Life has changed dramatically
7 ‘There were times I had to step outside to hide my tears, take deep breaths and then carry on’
8 In Oz, Marianne would have told Connell: ‘Get stuffed, you gutless wonder’
9 Irishman in Malta not surprised by green list change
10 Harlots? It’s all pumping buttocks from the men. Which is fair enough
11 Students to wear face coverings in lectures where two metre distance not possible
12 Five of the best foundations to try as the world comes back to life
13 Fresh investigation into the murder of Michaela McAreavey in Mauritius
14 ‘My mother is a controlling, manipulative, narcissistic person'
15 Boy’s treatment by school over alleged thefts was ‘unbelievable’, judge says
16 Newton Emerson: Stormont was not the centre of John Hume’s vision
17 Coronavirus: 50 new cases as Glynn says phase four delay disappointing for many
18 ‘This was like a nuclear bomb’: More than 2,700 injured in Beirut explosion
19 John Hume obituary: Nationalist leader who championed ‘agreed Ireland’
20 ‘I’m lucky to be alive’: Irish citizens describe Beirut explosion
21 Italy threatens Ryanair with flight ban for alleged Covid-19 violations
22 Covid and Brexit could pose risk to medicines supply, says pharma sector
23 Donohoe does not commit to specific compensation for pubs
24 ‘I’ve had my butt kicked for the past three years’: Jamie Oliver on fame and failure
25 Ireland needs to move to ‘zero-Covid’ policy to avoid catastrophe, scientists say
26 ‘Pat Hume did so much...Derry people know that, and remember that’
27 Dignitaries send tributes to Hume funeral from around the world
28 The Irish Times view on the decision to delay pub openings
29 Funeral of John Hume hears peacemaker ‘gave dignity and life to so many people’
30 How The Simpsons predicted 9/11, Trump and Disney-Fox
31 Shock explosion in Beirut shows how the unpredictable will challenge Europe
32 Is Cameron Diaz’s ‘clean’ wine as revolutionary as she thinks?
33 Europe braces for Covid-19 wave as Spain records 8,500 new cases over weekend
34 Not for the birds: Keep your blueberries for these delicious oat slices
35 The Music Quiz: Which was the first Irish act nominated for the Mercury Prize?
36 Sacrificing pubs for schools: Ireland’s latest Covid trade-off
37 Grafton Street: ‘It’s like a ghost town’
38 Newly-appointed Junior Ministers will not get special advisers
39 Gardaí find potential breaches of Covid-19 rules in 24 pubs
40 Two former solicitors remanded on bail after being charged with fraud offence
Real news has value SUBSCRIBE