Mary Hannigan: Hand of Thierry no comfort to Jamie as Rodgers departs 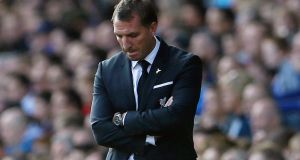 It was the quarterback Peyton Manning who once declared that “pressure is something you feel when you don’t know what the hell you’re doing”.

If that’s the case, then half the managers in the English Premier League are at a loss to know how to turn around their ailing fortunes, some of them now experiencing less job security than Stuart Lancaster.

Maybe even the Jose man himself. As Jamie Redknapp put it on Saturday, “it’s like his ’ead’s in a washing machine at the moment”.

The Liverpool manager, of course, had been through the delicate wash of late too, with more than the odd visit to the rinser, but the avoidance of defeat by Everton yesterday meant he’d live to fight another day. Well, a couple of hours any way, as it proved.

With that, Thierry placed his hand on Jamie Carragher’s left knee, in a comforting kind of way, and it was hard to tell from Jamie’s reaction whether he was more shocked by the Hand of Thierry (Roy: “Let it gooooo!”) or the departure of Brendan.

There are strikers who attempted to place their hands on sundry Jamie bits over the years who are still being reassembled in hospital.

Jamie wasn’t, though, exactly tearful about the news, reckoning Brendan was fortunate not to be rendered unemployed after last season.

But he was at a loss to understand why his employers would give him bucket-loads of loot to spend in the summer, only to ship him out the door a few months later, with his successor then tasked with finding clubs to which he could sell Brendan’s purchases at a sizeable loss.

And then, as if things couldn’t get any worse for his beloved club, Jamie only went and delivered the ultimate put-down:

“They think they’re a big club – but the real big clubs are not too worried about them.”

Graeme Souness flinched a little, that was a blow so low he was winded, while Thierry aimed another comforting hand at Jamie’s knee, only to receive a look that told him when he’d get it back, it would be fingerless.

“With all due respect to Brendan Rodgers, ” said Graeme, and you sensed a monster amount of disrespect was about to be delivered, “I just don’t see how they gave him the job in the first place.” See?

“I was astounded he actually got an opportunity to manage Liverpool without having anything on his CV to suggest he should get a big club like that.”

Jamie, still keeping an eye on Thierry’s hand, shrugged, reminding Graeme that while he might have departed Anfield with his luggage stuffed with medals, just about all his successors have won in the last decade is the Capitol One Cup. And he spat out the words like he didn’t feel beating Cardiff City on penalties to win the competition was on a par with those European Cup nights of glory.

There were several people for whom Brendan’s exit was good news, like Louis van Gaal (The Massacre at the Emirates relegated to story number two), Jose (and all Sky’s Greg Whelan fella asked was “what did you make of your team’s performance today?” – seven minutes later and Jose was still sounding like David Icke), and Aston Villa gaffer Tim Sherwood (“It’s alright saying ifs, buts and maybes - in factsies, we haven’t picked up the free points again”).

And Jamie Redknapp (“Martial is the best 19-year-old since Lionel Messi” – he might well be, but Jamie ensured that Anthony would have as much success against the Arsenal rearguard yesterday as an ’ead in a washing machine).