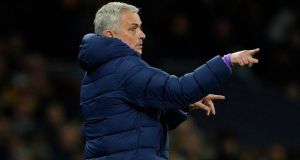 Jose Mourinho’s Tottenham team are into the FA Cup fourth round after their replay win over Middlesborough last night. Photograph: EPA

At around 4pm this afternoon there will be a significant landmark in the new era for Irish rugby with the announcement of Andy Farrell’s first squad for the opening games of the forthcoming Six Nations. Youngsters Ronan Kelleher, Caelan Doris, Max Deegan and, possibly, Will Connors, are all strongly in consideration to be named. And Gerry Thornley believes Johnny Sexton is likely to be named as captain. In his weekly column - Gordon D’Arcy explains why for Munster, who have had one foot in the past, coming unstuck in Europe could spur them on: “Munster need a medium- to long-term strategy that must be understood internally so it can be seen externally.”

Tottenham’s Hotspur’s Argentine duo Giovani Lo Celso and Erik Lamela both scored as José Mourinho’s side edged past Middlesbrough 2-1 in their FA Cup third-round replay last night. Joelinton scored his second Newcastle goal as the injury-hit Magpies strolled to a 4-1 replay win over Rochdale, while League One side Shrewsbury beat Bristol City 1-0 to set up a showpiece home clash against European and world champions Liverpool in the fourth round of the competition. Read your round-up of last night’s FA Cup matches here. Manchester United have changed their plans to spend the winter break in Qatar due to fears over safety in the Middle East - but before that they host Wolves in tonight’s FA Cup replay. A delegation led by Minister for Sport Shane Ross will meet with senior Bank of Ireland officials on Wednesday as part of an effort co-ordinated with Uefa to provide the assurances the financial institution requires to support the FAI’s survival plan, after a key meeting in Dublin was described by all sides as “productive”. Read the latest from Emmet Malone on the FAI’s attempts to receive financial support, here.

1 No obvious signs of injury on remains of McGinley children
2 Parents jailed over female genital mutilation of daughter
3 Ireland v Scotland: Doris’ day as Caelan set for first cap
4 Man given suspended sentence for assaulting transgender escort
5 The notorious Donald John Trump goes on trial
6 Hugh Wallace: The day I stopped drinking changed my life
7 ‘Wonderful boys’: McGinley children will be greatly missed, school says
8 Labour Party to consider introducing four-day week
9 Varadkar blames British ignorance of Ireland for Brexit impasse
10 Why our love for Leo is withering on the vine
11 Six Nations: Pundits, journalists and players have their say
12 2020 bargain cars: What to buy with a limited budget in mind
13 Ireland’s housing crisis in five revealing graphs
14 Bespoke unit for ‘deeply disturbed’ woman would cost €1m, court told
15 I’m Irish and I live abroad. Why have we been forgotten in Election 2020?
16 Brexit is a collective English mental breakdown
17 Kobe Bryant obituary: A transcendent, if enigmatic, superstar
18 Una Mullally: Those attacking Sinn Féin have become cheerleaders in reverse
19 Seamus Mallon: Funeral mass remembers peacemaker
20 Comcast acquires Irish cloud-based telco Blueface
21 Motorists urged to take care after snowfalls in west of Ireland
22 Doctor struck off register for failing to keep up with professional competency
23 Dancing with the Stars: Glenda Gilson sinks like Titanic
24 Frank McDonald: Housing policy a litany of failure
25 ‘We serve neither Queen nor Commisar’: The birth of the Provisional IRA
26 Aontú leader withdraws action seeking to halt RTÉ election debate
27 Kildare priest appointed new Catholic bishop in west of Ireland
28 Woman exhumed after being buried in wrong grave in Kerry cemetery
29 Fintan O’Toole: The terms of Brexit hold a great irony
30 My teenager can’t bear the sound of us chewing at dinner
31 Ryanair to pay portion of Peter Bellew’s legal costs, court rules
32 Thomas Markle: My Story – ‘It’s time to look after Daddy’
33 Why are Fine Gael and Fianna Fáil refusing to go into coalition with Sinn Féin?
34 Patient advocate on HSE board resigns in protest at ‘tokenistic’ treatment
35 Auschwitz anniversary: ‘I probably saw 300,000 Jewish people perish right in front of me’
36 ‘It’s something you don’t want to hear. You always think it happens in other places’
37 Are almonds bad for the environment?
38 Beware the perils of Veganuary
39 Money matters: ‘My father embarrassed us with his haggling’
40 Dublin house deaths: Three young children named
Real news has value SUBSCRIBE