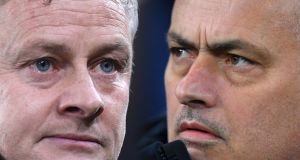 Manchester United resume their Premier League campaign against Tottenham in London tonight in a key battle for Champions League qualification. Ole Gunnar Solskjær is confident Paul Pogba can finally show his “world-class” ability after an injury-blighted season: “I can see his mentality and focus now that he is fit and training and available. He is one of the best midfielders in the world so hopefully we can get that going as soon as possible.” While Spurs manager José Mourinho has accused the football authorities of double standards over the decision to ban Dele Alli for an ill-judged social media post about coronavirus but ignore much worse behaviour from others in the game during the pandemic. United v Tottenham kicks off at 8.15pm on Sky Sports and follows Norwich v Southampton at 6pm (free to air on Sky). Malachy Clerkin asks in his column this morning, could sport without fans actually be better? “It is an entirely pleasant change not to have to listen to braying crowds boo the referee after every 50/50 tackle. Players seem to be getting up and getting on with things a bit quicker too, now that there’s no crowd noise to milk.” Click here for Emmet Malone’s interview with the FAI’s interim chief executive Gary Owens about working his way through the association’s problems and resuming the Airtricity league.

Stradivarius confounded fears soft ground might scupper his chances of a Gold Cup hat-trick with a spectacular romp around a behind closed doors Ascot. The John Gosden trained star joined Sagaro as a hat-trick hero in the historic stayers championship and is as low as 13-8 to match Aidan O’Brien’s ultimate Gold Cup champion, Yeats, by winning a fourth in 2021. Jessica Harrington turns to Tom Marquand, the rising star of the British jockeys room, for Millisle in Ascot’s Group One feature today (3.35pm). Millisle drops back to six furlongs for the Commonwealth Cup after failing to fulfil classic ambitions in the 1,000 Guineas.

1 John Cleese has a faulty sense of humour about the Irish
2 Michelle O’Neill will not step aside ‘under any circumstances’ despite calls from other parties after Storey funeral
3 Why are markets booming when a crash is on the way?
4 How much do Irish people earn? And what will Covid-19 do to our wages?
5 Health officials ‘very concerned’ about foreign travel, says Donnelly
6 World, look away now – these are dark days for the United States
7 Sentence for attempted murder by teen in Dun Laoghaire too lenient, court finds
8 Bobby Storey: The IRA's planner and enforcer who stayed in the shadows
9 ‘Grossly irresponsible’- Waterford mayor condemns house party of 60 people
10 ‘Ten of the best books set in Ireland’: Does the Guardian get it right?
11 Sex, swearing and flushing the loo: 10 films that broke taboos
12 Pub substantial meal rules a ‘farce’ like being on set of Darby O’Gill and the Little People
13 Galway Clinic gets orders dismissing action over board decision
14 Irish holidaymakers have been thrown under the bus
15 Limerick people ‘grossly insulted ’ by Micheál Martin appointments, says Willie O’Dea
16 Drumcondra credit union collapses as merger plan fails
17 Netflix: 10 of the best new shows and films to watch in July
18 In turmoil on and off the pitch: Where did it all go wrong for Barcelona?
19 ‘I felt something furry move under my hand. Man alive, I am terrified of rats’
20 Shared parenting: fathers being forced to go down ‘adversarial route’
21 Trump says Covid-19 will disappear after US reports record increase
22 Who are the new junior ministers? All their profiles are here
23 Open Ireland as soon as possible - Tourism chief warns of 'catastrophic' impact of pandemic
24 Irishwoman in Athens: ‘Being stuck in Greece isn’t exactly a hardship’
25 Dunnes Stores trials online ordering from Cornelscourt outlet
26 Should we stay or should we go? Readers on holidaying abroad this year
27 Full line up of junior ministers unveiled as Taoiseach accused by one TD of snub
28 Bank worker deactivated security feature on 26 KBC accounts, court told
29 Woman who said ‘I have the virus’ and coughed in direction of paramedics jailed
30 Newton Emerson: A unionist-free Seanad? Nobody minds really
31 Could your old car be giving away all your secrets to its new owner?
32 Pods, bubbles, staggered drop-offs: Reopening schools in a brave new world
33 Thousand acre Offaly farm guiding €9m biggest land sale in years
34 Up to 400 jobs saved in Cavan as MML takes stake in CG Power Systems
35 Aryzta needs to sell €600m of assets to reset business, shareholders claim
36 Innovation hubs keen to get show back on the road
37 Dara Calleary given Gaeltacht responsibility after controversy over Cabinet snub
38 Permission sought for €150m film and media campus in Wicklow
39 Covid-19 risks from international travel remain dangerously high
40 How the Government can woo young Sinn Féin supporters
Real news has value SUBSCRIBE