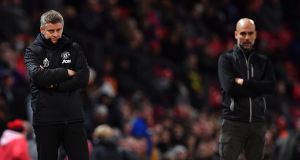 The first Manchester derby of the decade ended in a 3-1 win for Manchester City in their League Cup semi-final first leg at Old Trafford last night. Marcus Rashford’s 17th goal of the season kept Manchester United’s slim hopes alive, although by then Pep Guardiola’s defending champions were coasting at 3-0 with 20 minutes to go thanks to Bernardo Silva, Riyad Mahrez and an Andreas Pereira own goal after embarrassing their hosts with a display of dominant, mercurial football. Darren Fletcher was on TV duty, watching his former team struggle however he still believes “United are still in this tie”. And he reckoned Nemanja Matic was terrific. And Ole was doing fine. Read Mary Hannigan’s TV View here. In tonight’s other semi-final first leg, Leicester City host Aston Villa with kick-off at 8pm.

Simon Zebo’s ankle injury is likely to rule him out of Sunday’s Champions Cup game - a second reunion with his former club Munster - but otherwise Racing are pretty much at full strength, with 38 fit players out of their registered 40. Gerry Thornley believes the Irish winger’s absence is unlikely to hobble a fully focused Racing. In his weekly column, Gordon D’Arcy explains why the festive interpros provided a revealing insight into the Irish provinces’ standing: “I am very disappointed with the level of scrutiny about team selections over Christmas rather than what was happening on the field. This may have been a valid complaint a few years ago, when the gap between the regular starter and squad player was obvious, but we currently have three provinces with enough resources to deliver quality performances every week.”