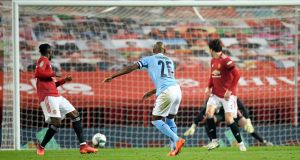 Manchester United are out of the League Cup at the penultimate stage, after they were beaten 2-0 by rivals City at Old Trafford last night. With the game goalless at half-time, Ole Gunnar Solskjaer’s side were left to rue some poor defending in the 50th minute as John Stones bundled home a free-kick to give the visitors the lead. The game remained in the balance until the 83rd minute when Fernandinho’s well taken effort from the edge of the box confirmed a place at Wembley for Pep Guardiola’s side, on a night they paid tribute to Colin Bell, who died on Tuesday aged 74. City will play Tottenham in the final, which has been moved back to April 25th.

Mayo have lost another stalwart, after Seamus O’Shea yesterday confirmed his retirement from intercounty football. O’Shea’s departure follows that of Tom Parsons, David Clarke and Donie Vaughan this week. The quartet all retire having come agonisingly close to lifting Sam Maguire - most recently last month - but as fellow county veteran Liam McHale says, all four can exit with their heads held high: “That’s the thing for me, was my effort honourable? I can look back now and say, ‘Yeah, it was’. That’s how I reflect on it and all of those guys retiring now can say the very same.”

10 Emma de Souza: My generation deserves to have its say on Irish unity now

12 Kremlin accuses US of backing anti-Putin rallies across Russia

15 Oscar Wilde, my grandfather, ‘talked himself into prison’

17 More than half in North want vote on a united Ireland, poll finds

19 Badge of distinction: Meet the first Sikh in the Garda Reserves

21 Chris Johns: If this is to be the last lockdown it must work

23 Conor McGregor stopped by Dustin Poirier in second round

25 A Kerala Kitchen curry for the weekend

29 My first year as a TD: ‘I felt like I was working in a blizzard’

31 Cliff Taylor: It's looking like a staycation once again in 2021

34 The chickpea stew that broke the internet in the US is here. Give it a go

38 Ireland’s lost golf courses: What happens when the gates close?

40 ‘Don’t write me off yet’: Conor McGregor to fight on after Poirier knockout