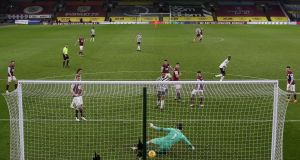 Not since 2012 under Alex Ferguson have Manchester United been top of the Premier League after 17 games. Until now, that is, after Paul Pogba’s strike at Turf Moor gave Ole Gunnar Solskjaer’s side all three points over Burnley and moved them three points clear of Liverpool at the top of the league. The two sides now meet in a top-of-the-table showdown at Anfield on Sunday and after last night’s win, Solskjaer said his team are relishing the test. “We’re in a good position. But no one will remember the league table on the 12th of January; Sunday is a test of character and quality. We’re looking forward to it; it will be a great test of we’re at against the deserved champions and the best team by a mile in this country for quite a long time. We’re ready, excited and hungry,” he said. In domestic news there was another blow for Stephen Kenny last night as Ireland goalkeeping coach Alan Kelly confirmed that he will not be returning to the setup under the new manager – leaving Kenny with two roles now to fill after Damien Duff stepped down on Sunday. It’s another unwanted problem for the manager who has endured plenty of them since taking over in August and now has to bring in two new staff members before the beginning of World Cup qualifying in two months.

On to rugby and Leinster could face Munster four times before the end of the season with the first match-up on Saturday week in their rearranged Pro14 match which was originally due to be played on St Stephen’s Day. Depending on what happens with the rescheduled Champions Cup the two teams could also meet in the quarter-final of that competition with Gerry Thornley writing this morning that the two teams are gearing up to see a lot of each other over the next while. In international rugby the fate of this year’s Six Nations is still unknown with French authorities looking for safety guarantees from Ireland and England but a financial boost for the unions does come in the news that an announcement confirming CVC’s purchase of 14.5 per cent of the commercial rights to the tournament is due in the next few weeks with the IRFU likely to receive in the region of €45m to €50m.

6 ‘An inspiration’: Young poet Amanda Gorman and her words capture the moment at Biden inauguration

9 Temperatures set to plunge to -4 degrees, bringing risk of snow

10 Can five minutes’ exercise a day make you fit?

11 Miriam Lord: Back to school for foot-in-mouth specialist Josepha Madigan

13 Cottage with investor appeal in booming D4 enclave for €650k

16 The lockdown may squash the virus but what will it means for Ireland's economy?

23 Leo Varadkar and the leak: New questions for Tánaiste about GP contract

25 Hurling between the high rise flats: My first glimpse of the emigrant life

28 How to use up your Covid pantry ingredients imaginatively

34 ‘Outside home, school is all he has’: Mother urges help as special schools remain shut

35 Rugby Stats: Ruddock and Coombes tick all the boxes for Ireland squad inclusion

36 Trust the Irish to cure a runny nose

37 ‘Brexodus’ of jobs from City of London to continue, says EU commissioner

40 ‘The hellhole says goodbye’: Glee and relief in Europe as Trump departs