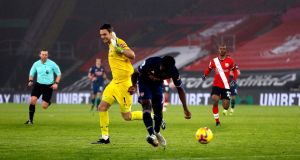 Manchester City are the ninth side to top the Premier League table this season after they thrashed West Brom 5-0 at The Hawthorns last night. Pep Guardiola’s side needed just six minutes to open the scoring against the relegation-threatened Baggies and led 4-0 at the interval, before Raheem Sterling rounded off the scoring in the second-half. Elsewhere Bukayo Saka impressed as Arsenal came from behind to beat Southampton 3-1 at St Mary’s and avenge last weekend’s FA Cup defeat. The Gunners have now won five of their last six league fixtures. West Ham are up to fourth as they fought back from an early Wilfried Zaha goal to beat Crystal Palace 3-2, Tomas Soucek impressing again with a brace at Selhurst Park. And Newcastle’s dismal run continued as they were beaten 2-1 by Leeds at St James’ despite a much improved second-half performance. There are five top flight fixtures tonight, with new manager Thomas Tuchel in the Stamford Bridge dugout against Wolves after his Chelsea appointment was made official on Tuesday (kick-off 6pm). Elsewhere, Aston Villa travel to Burnley (6pm), Brighton take on Fulham (7.30pm) and Everton meet Leicester City at Goodison Park (8.15pm). Meanwhile, Manchester United can return to the Premier League summit with victory over Sheffield United at Old Trafford (8.15pm).

In his column this morning Gordon D’Arcy has looked ahead to the Six Nations and he suggests this year’s Championship won’t be the same competitive spectacle with fixtures being held behind closed doors. “On the drive home I realised that home advantage barely exists anymore. Right when we need it most, with England and France coming to Dublin, the value is next to nothing.” Ireland finished third in last year’s Six Nations and D’Arcy believes coming second this year would represent a successful campaign - however, it is vital new forwards coach Paul O’Connell can have a galvanising impact on a lineout which too often malfunctioned in 2020. He writes: “I do not believe that Paulie’s role is to rouse the troops as he did so effectively as a player. The likes of James Ryan crave his technical expertise as much as his experience. They need O’Connell the lineout coach to be on a comparable level to the mentors that have come before him. The Ireland lineout has to move past the mess of 2020.”

11 Finn McRedmond: Wokeness is dying, another victim of the pandemic

17 Before you buy an electric vehicle, ask: Will I drive it enough to make it eco-friendly?

20 Davy board to search for other potential cases of wrongdoing

34 ‘I don’t even know when I was born’: Scale of illegal adoption is hard to take in

35 Home office, home bar and scope for another home alongside for €1.55m