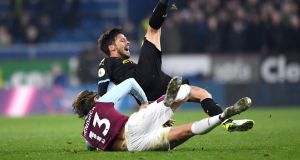 Manchester City got their faltering Premier League title defence back on track with a dominant 4-1 win away to Burnley at Turf Moor last night. Following last weekend’s 2-2 draw at Newcastle Pep Guardiola’s side needed 24 minutes to take the lead against the Clarets thanks to a fine finish from Gabriel Jesus. Jesus, Rodri and Riyad Mahrez extended City’s lead before Robbie Brady grabbed a late, late consolation for Sean Dyche’s side. Elsewhere 10-man Crystal Palace made it two wins on the bounce and moved up to fifth thanks to a 1-0 win over Bournemouth at Selhurst Park, Jeffrey Schlupp scoring the winner in the 76th minute after Mamadou Sakho’s 19th minute sending off. Tonight José Mourinho returns to Old Trafford as his Tottenham Hotspur take on Ole Gunnar Solskjaer’s Manchester United (kick-off 7.30pm, Premier Sports). There are six top flight fixtures in total, with struggling Everton travelling to Anfield (8.15pm) and Chelsea welcoming Aston Villa to Stamford Bridge (7.30pm).

Meanwhile in his column this morning Gordon D’Arcy has suggested there could be a sea change coming in European rugby, as clubs put a greater emphasis on developing home grown talent - rather than reaching for the chequebook and splashing out on expensive marquee signings. He says this is something Leinster have been doing since his time in the academy - but now the powerhouses of English and French rugby have started to follow suit. He writes: “But the game is changing. Bernard Laporte has forced the Top 14 clubs to play more French qualified players with Toulouse quickest to embrace a return to local talent. The rest are following. Northampton have copped on. Saracens and Exeter are only going to improve their underage programmes while the old guard of Leicester, Bath and Gloucester should get there eventually.” And he believes this weekend’s latest round of Champions Cup fixtures - which sees all four provinces face Premiership opposition - could provide proof that the English clubs are starting to catch up.