Lowe among seven changes to Ireland XV; Darragh Ó Sé on what went wrong for Kerry 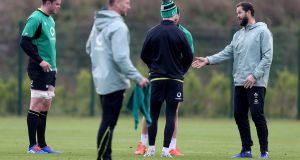 Andy Farrell has named 11 Leinster players in his team to face Wales on Friday. Photograph: Inpho

Andy Farrell has made seven changes in personnel and three positional switches to the Ireland team to face Wales in Friday’s Autumn Nations Cup opener. One of the most striking aspects of an exciting-looking, redesigned Irish XV is that it features 11 Leinster players. James Lowe will become the 11th player to represent Ireland through the residency ruling when he makes his Test debut at the Aviva Stadium. Gordon D’Arcy believes Farrell’s challenge is getting player buy-in to incremental change: “The coach hasn’t a hope if the players do not buy into his methods. Farrell gets this. Ireland are trying to manipulate opposing defences to create mismatches. It is a simple enough game plan where they are being asked to think on the fly more than replicate precise movements.”

Rory McIlroy, once again bidding to complete the final leg of a career Grand Slam, will begin his US Masters campaign on Thursday alongside Dustin Johnson and Patrick Cantlay while Shane Lowry will play alongside defending champion Tiger Woods and US amateur winner Andy Ogletree in the first two rounds. Check out all of the groupings and tee-times here. McIlroy is coming in under the radar this week at Augusta National, he spoke to the media on Tuesday: “This week, it’s take advantage of the holes that you can, play smart on the other ones. And if you can do that and think a little bit better and concentrate a little bit more, and just limit your mistakes, that’s always a good thing around here.”

1 Reopening hospitality sector will mean limiting Christmas gatherings, Nphet warns
2 Admission of mistake in Oxford vaccine dose raises doubts over reliability
3 Varadkar told McEntee that Woulfe would make ‘good judge’, Dáil hears
4 Michael Flatley’s house clear-out: from Hannibal Lecter mask for €85,000 to ‘gorgeous cushions’ for €190
5 Coronavirus: 335 new cases and three further deaths
6 Wild Mountain Thyme director says Irish accents are hard to understand
7 Boy (4) left in hospital for over two years due to Tusla and HSE failings, report says
8 The Crown’s Josh O’Connor: ‘I’m a republican. I’m not interested in the royal family’
9 Ranelagh’s brand new street with three-beds from €1.325m
10 Cliff Taylor: Deal or no deal we are now heading for a hard Brexit
11 Q&A: What restrictions are going to be lifted next week?
12 West Cork castle shell sells in weeks for around €2.7m
13 400 – yes, 400! – Irish retailers for all your online Christmas shopping
14 ‘He’s Jekyll and Hyde’: The inside story of an Irish barrister and conman
15 Karlin Lillington: How I managed to cut my mobile phone bill by at least half
16 Andy Farrell hands Billy Burns first Ireland start against Georgia
17 Breakfast in Ballsbridge: When Audrey Hepburn met her dad in Dublin
18 More walks and less TV could help limit Covid spread at Christmas – WHO doctor
19 Last orders for Rí-Rá and Globe as Central Hotel gets green light to expand
20 Black Friday hotel deals: some of the best offers from around Ireland
21 Saoirse Ronan and Daniel Day-Lewis on ‘greatest 21st-century actors’ list
22 Move to EU or face disruption, City of London is warned
23 Newton Emerson: Unionists should declare Ireland is worked out, Biden can keep it that way
24 Michael J Fox: ‘In the wheelchair, I’m luggage. No one listens to luggage’
25 Covid clause: No restrictions on Santa as Government says Christmas present delivery ‘essential’
26 Four new statues to end Trinity Long Room’s ‘men only’ image
27 Miriam Lord: The Dáil's answer to John Wayne overcooks the ham slice, by slice, by slice
28 Fiona Reddan: Who’s afraid of Revolut? Not AIB and BOI it seems
29 Up to 2,000 cancers may be ‘lost’ because of Covid disruption
30 Ireland could lose out as France lays claim to most of €5bn Brexit compensation fund
31 Ireland ‘will do well’ out of €5 billion Brexit fund, says Coveney
32 ‘Being in Ireland feels like winning the lottery’: Syrians arrive after delay due to Covid
33 Voting on Irish unity without follow-up plan poses grave risks – study
34 Coronavirus: HSE departure from Kerry nursing home of ‘serious concern’
35 Derry bus firm cancels shopping tour to Dundrum after ‘double checking’ rules
36 Irish Life fund pays €49m for 94 Dalkey apartments
37 Soldier with exemplary record jailed for ‘outrageous assault’
38 Two men found dead in Dublin city centre
39 Man on firearms charges is in special protection unit in prison, court told
40 Stand-off in Europe over plan to ban ski season due to Covid-19
Real news has value SUBSCRIBE