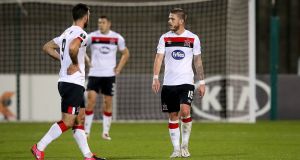 Dundalk players during their 2-1 defeat to Molde. Photograph: Inpho

Dundalk started their Europa League Group B campaign with a 2-1 defeat to Norwegian champions Molde in Tallaght last night. Competing in this stage of the competition for the first time in four years, they went ahead through Sean Murray’s glancing header in the 35th minute but their opponents were much improved following half-time and Etzaz Hussain’s deflected volley levelled matters just after the hour before Ohi Omoijuanfo’s 72nd-minute penalty helped Molde claim all three points. Elsewhere Celtic lost 3-1 to AC Milan, as Arsenal, Spurs, Leicester and Rangers all got off to winning starts. The Ireland women’s team take on Ukraine this afternoon knowing if they get a result at the Obolon Arena in Kiev then a playoff for the next European Championships is guaranteed; win and there may still be scope to qualify automatically for a first major championship. Vera Pauw’s side are keen to seize their huge opportunity - kick-off is at 5pm.

Following the surprise government decision to close golf courses as part of their new Level 5 restrictions, Ruaidhrí Croke explores how Ireland compares to other countries when it comes to this new policy of golf courses closing? Caddie Colin Byrne writes this morning that it is hard to understand how golf has become the bogey man now: “I can’t help but wonder if that ill-fated Oireachtas golf jamboree out west had not taken place under such a murky cloud of controversy back in August would golf perhaps have been dealt a more measured hand. Is there a waft of notional elitism still lingering above the golf club locker-room that politicians now feel compelled to distance themselves from?” Coronavirus continues to threaten the upcoming GAA championships, and the Gaelic Players Association has demanded “baseline testing” of all county panels, as part of the price for their continuing agreement to proceed with the season. A statement is expected later today after a possible resolution emerged on Thursday. In his column this morning Jackie Tyrrell explains why a winter hurling championship will be a test of skill and endurance: “If your first touch is deficient, there’s no hiding it on a wet day. No wall-ball or alley cracker can prepare you for this. A wet slippy heavy sliotar, a wet grip on your hurl, wet and messy turf underfoot. Not to mention cold hands, water droplets constantly dropping down your face guard and breaking your concentration.”