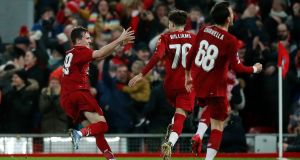 Liverpool are in the fifth round of the FA Cup after Tuesday night’s win over Shrewsbury Town. Photograph: PA

The youngest team in Liverpool’s history justified the faith Jurgen Klopp placed in them, when he absented himself and rested his first team from their FA Cup fourth-round replay, by beating Shrewsbury 1-0 at Anfield. Former Manchester United academy player Ro-Shaun Williams’ 75th-minute own goal proved to be the difference, moments after the League One visitors saw David Edwards’ header ruled out by VAR. It was a well deserved victory however for the inspired youngsters of the league leaders. In the night’s others FA Cup replays, Newcastle edged Oxford in extra-time after Irish midfielder Liam Kelly’s free-kick had inspired a comeback for the hosts. Wayne Rooney scored as Derby booked an FA Cup date with his former club Manchester United by beating Northampton 4-2, and Birmingham and Reading both progressed via penalty shoot-outs. Read a round-up of the night’s matches here. Ahead of his team’s fourth round replay against Southampton tonight, José Mourinho has been more specific about Harry Kane’s injury and how much of the season he expects him to miss. That match kicks off at 7.45pm in London.

Ireland head coach Andy Farrell has made two changes to his Ireland team for the visit of Wales in round two of the Six Nations next Saturday - as expected Robbie Henshaw and Peter O’Mahony replace the injured Garry Ringrose and Caelan Doris. On to the bench comes Leinster backrow Max Deegan, and John O’Sullivan has prepared an excellent profile on a rare talent who is set to get his big opportunity. Reflecting on the opening day victory over Scotland and looking ahead to Wales - Gordon D’Arcy believes Farrell is gambling on Conor Murray’s ability to reproduce his best (Subscriber Only): “I just – like so many others paying attention – want to see the undeniable class of Cooney and Deegan rewarded from the start. Both offer traits that we are not currently seeing from Murray and O’Mahony.”

1 Coronavirus: HSE braces for possible peak of Covid-19 cases in mid-April
2 Coronavirus: World’s oldest man marks 112th birthday in isolation
3 Coronavirus: 14 more deaths as list of essential workers published by the Government
4 Irish flight bringing PPE from China due in Dublin in afternoon
5 Isolation on the Wild Atlantic Way: ‘I stopped here for the day – and never left’
6 Coronavirus: Spain’s death toll rises by record 838 overnight to 6,528
7 Coronavirus: Government publishes list of essential services
8 Gardening for beginners: How to sow and grow for the first time
9 David McWilliams: We need to totally reimagine economics
10 If you think governments are spending money now, just wait
11 Late Late Show with Miriam O’Callaghan: The most surreal primetime TV I’ve ever watched
12 Coronavirus: Smartphone app to facilitate contact tracing to be rolled out, HSE says
13 No-stress coffee traybake works every time
14 Coronavirus: Ireland suffers highest daily death toll
15 Trump abandons quarantine proposal as coronavirus spreads
16 Benign impact of Covid-19 on air quality and carbon emissions
17 A bean burger from the cans at the back of the press
18 Remote working doesn’t suit everyone, and it exposes woolly leadership
19 Irish writers on Covid-19: ‘We’re all having a shockin’ dose of the wombles’
20 Leading Northern Ireland lawyer in critical condition because of coronavirus
21 Coronavirus: Sweeping powers with fines of up to £5,000 come into force in North
22 Coronavirus: The list of businesses allowed to stay open under new measures
23 Is it a good idea to move in with my partner now, or am I mad?
24 Fintan O’Toole: We are learning how much we rely on low-paid workers
25 Coronavirus: Older people who leave houses may be asked to go home - Harris
26 Coronavirus: Oxygen equipment meant for Ireland held back by Italy
27 Dublin software company Workhuman ‘on course’ for €1bn valuation
28 The chickpea stew that broke the internet in the US is here. Give it a go
29 Father of three deceased children appeals for letters during isolation
30 Coronavirus: 16 tips to help you cope in the new world we live in
31 Coronavirus: Construction sector most significant part of new shutdown
32 The Clare man in Russia on how Covid-19 is changing life there
33 Laugh in the time of Corona: Favourite funny books
34 Coronavirus: Healthcare worker in Republic dies after contracting virus
35 ‘Ross, from this morning, you’re going to be home-schooling Honor.’ I laugh out loud
36 Man who allegedly spat at garda and said he had coronavirus due in Cork court
37 Cliff Taylor: A big recession is coming but it’s not a rerun of 2008
38 Coronavirus: ‘you may have heard of a game called Plague Inc’
39 ‘Coronabonds’ row could endanger the European project
40 Jennifer O'Connell: Covid-19 is normalising mass surveillance of citizens
Real news has value SUBSCRIBE