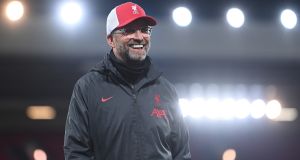 Premier League champions Liverpool maintained their perfect start to the season with a 3-1 win against Arsenal at Anfield last night. The visitors took the lead through an Alexandre Lacazette strike but Liverpool were in front by the break thanks to goals from Sadio Mane and Andy Robertson while substitute Diogo Jota made sure of the win with a late strike on his debut. Earlier Irish midfielder Conor Hourihane was among the goals in Aston Villa’s 3-0 win over Fulham. Ireland manager Stephen Kenny will be pleased with the way some of his players have been faring as he prepares to name his second senior Ireland squad at lunchtime today. As well as Shane Duffy making an impressive start at Celtic - the likes of Seamus Coleman, David McGoldrick, James McCarthy, Jeff Hendrick, Hourihane, Dara O’Shea, Callum Robinson, Matt Doherty and Aaron Connolly have all seen regular Premier League action so far. Ireland head to Bratislava next week for Thursday week’s twice postponed Euro2021 play-off game against Slovakia before heading into Nations League group games against Wales and Finland.

Gerry Thornley believes the South African sides would be a welcome addition to the Pro14 because they would generate more TV income, competitiveness and interest: “the general council of SA Rugby meets on Tuesday and according to sources in South Africa it will be a major surprise if they don’t ratify the addition of all four Super Rugby franchises, the Bulls, Lions, Sharks and Stormers, in an expanded Pro16 - the lifting of travel restrictions permitting. With the British and Irish Lions due to tour next year, they need games in the short-term, and in the longer term it has many positives.” The new Pro14 season gets underway this weekend, and an opening Friday night at an empty RDS against the Dragons wouldn’t seem the ideal cure for Leinster’s Champions Cup hangover, although Stuart Lancaster thinks otherwise: “I don’t quite buy the fact that Dragons are a pushover, personally, and to be honest there’s nothing worse than being on the back of a defeat at the end of a season and having three months to think about it. It just sits with you and you can’t put it right.”