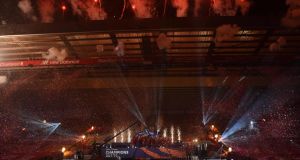 Liverpool captain Jordan Henderson lifted the Premier League trophy in Anfield last night, following his team’s 5-3 win over Chelsea in an open, thrilling and richly entertaining contest. Naby Keïta’s sublime goal started things off and the victory was sealed by Alex Oxlade-Chamberlain’s clinical finish, ensuring Liverpool remain unbeaten throughout a third successive league campaign at home. Earlier West Ham drew 1-1 with Manchester United - Mason Greenwood cancelled out a Michail Antonio penalty - guaranteeing their Premier League safety. The point means that United need only to draw with Leicester on Sunday’s final day to seal fourth place and Champions League qualification. Irish striker Callum Robinson was on target as West Brom ground their way to Premier League promotion thanks to a battling 2-2 draw with QPR on an incredible final day to the Championship season. Hull, Charlton and Wigan ended the season in the bottom three, though the Latics are appealing against their 12-point deduction, while Swansea pipped Nottingham Forest to the last playoff spot. In domestic soccer news, the FAI is still awaiting clearance from the Government for a quarantine relaxation for their international team between the upcoming Uefa Nations League fixtures.

Golf’s European Tour marked its return to a full format on Wednesday with the British Masters, and former US Open champion Michael Campbell is the story of the first round after his opening 68 left him four shots off leader David Law. He has not made a European Tour cut in seven years and lies outside the world’s top 2,000 ranked golfers. Irishman Jonathan Caldwell birdied the closing two holes to move into the top 10 as he carded a four-under 67, Paul Dunne carded a level-par 71 thanks to birdies on the 16th and 17th, but Cormac Sharvin and Gavin Moynihan have their work cut out to make the cut after they both shot 73. Leona Maguire is getting ready to ramp up her rookie season again, she explains to Philip Reid why she won’t be taking part in the LPGA Tour’s resumption in Ohio next week, but will resume competitive tour life in Scotland, with back-to-back weeks at the Scottish Open and the AIG Women’s British Open next month.