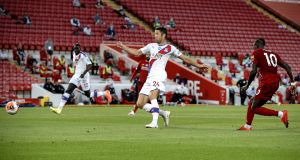 And so, after 30 years without a league title, Liverpool’s drought may finally end in the strange surroundings of an empty Stamford Bridge tonight. After a ruthless dismantling of Crystal Palace last night thanks to goals from Trent Alexander-Arnold, Mo Salah, Fabinho and Sadio Mané, Jürgen Klopp’s side will be crowned Premier League champions tonight if Manchester City fail to beat Chelsea. If City are to win and make Liverpool wait a little bit longer, they will have to do so without Sergio Agüero who may miss the rest of the domestic season with a knee injury suffered against Burnley on Monday night. Moving on to our Italia 90 Revisited series and this morning Emmet Malone speaks to Niall Quinn about his transformative goal against Holland and how, in his own words, it was the making of him. And in our dip back into the archives, Peter Byrne reflects on that performance against Holland and ponders the question whether the players being allowed to see their wives and girlfriends beforehand made any difference.

In golf, the PGA Tour will continue with the Travelers Championship this week despite a number of withdrawals – including the likes of Brooks Koepka, Graeme McDowell and last week’s winner Webb Simpson – because of Covid-19 concerns. Commissioner Jay Monahan spoke last night about how the Tour plans to tighten its safety protocols while reiterating that the number of positive tests is still quite low in the scheme of things.

1 Health officials ‘very concerned’ about foreign travel, says Donnelly
2 Why are markets booming when a crash is on the way?
3 World, look away now – these are dark days for the United States
4 ‘Ten of the best books set in Ireland’: Does the Guardian get it right?
5 ‘Grossly irresponsible’- Waterford mayor condemns house party of 60 people
6 Who are the new junior ministers? All their profiles are here
7 Bobby Storey: The IRA's planner and enforcer who stayed in the shadows
8 Open Ireland as soon as possible - Tourism chief warns of 'catastrophic' impact of pandemic
9 Trump says Covid-19 will disappear after US reports record increase
10 Irish holidaymakers have been thrown under the bus
11 Thousand acre Offaly farm guiding €9m biggest land sale in years
12 Could your old car be giving away all your secrets to its new owner?
13 DUP, SDLP, UUP and Alliance calls for Michelle O’Neill to stand down over Bobby Storey funeral
14 ‘I felt something furry move under my hand. Man alive, I am terrified of rats’
15 Irishwoman in Athens: ‘Being stuck in Greece isn’t exactly a hardship’
16 Woman who said ‘I have the virus’ and coughed in direction of paramedics jailed
17 Netflix: 10 of the best new shows and films to watch in July
18 Newton Emerson: A unionist-free Seanad? Nobody minds really
19 Dunnes Stores trials online ordering from Cornelscourt outlet
20 Full line up of junior ministers unveiled as Taoiseach accused by one TD of snub
21 Up to 400 jobs saved in Cavan as MML takes stake in CG Power Systems
22 Shared parenting: fathers being forced to go down ‘adversarial route’
23 Husband of Jean Eagers charged with her murder
24 How the Government can woo young Sinn Féin supporters
25 Permission sought for €150m film and media campus in Wicklow
26 Covid-19 risks from international travel remain dangerously high
27 Trophy Curragh stud farm with exceptional pedigree for €4m
28 Covid-19: Publicans and restaurateurs row over calls for VAT cuts
29 Rugby impasse continues as no deal reached in fourth round of IRFU salary talks
30 Tánaiste questions number of construction workers on pandemic payment
31 In turmoil on and off the pitch: Where did it all go wrong for Barcelona?
32 Russians grant Putin right to extend his rule until 2036 in landslide vote
33 Leaders spark anger as they look west for junior minister carve-up
34 ‘I wouldn’t fly if I didn’t think it was safe’ says passenger boarding flight at Dublin Airport
35 Ryanair passenger traffic slumps 97% as shutdown restricts travel
36 One-metre rule means all students may not return to school in September
37 Vodafone to speed up 5G rollout using new technology
38 Pods, bubbles, staggered drop-offs: Reopening schools in a brave new world
39 Who is in the new Cabinet? Members in profile
40 Supreme Court rules ‘substitute consent’ inconsistent with EU environmental law
Real news has value SUBSCRIBE