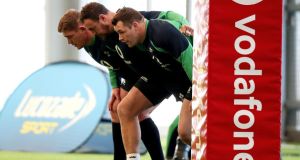 The Irish frontrow train ahead of Saturday’s clash with Wales. Photograph: Bryan Keane/Inpho

There’s a storm brewing on and off the pitch, with the arrival of Grand Slam champions Wales set to coincide with that of Storm Ciara this weekend. And in his column this morning Liam Toland has suggested Ireland will have their work cut out against Wayne Pivac’s side on Saturday. He writes: “Conor Murray noted excitedly this week the myriad of ideas and options flowing into the camp; that’s brilliant; but none however are road tested. Please be patient for we are vulnerable tomorrow.” As ever, Tadhg Furlong will be one of Ireland’s key players on Saturday - especially against a Welsh frontrow which struggled against Italy last weekend. But the tighthead offers far more than just physicality, with his inclusion in Ireland’s leadership group a testament to his rugby brain. Gavin Cummiskey writes: “The 27-year-old’s value to Irish rugby cannot be overstated - as proven by last Saturday’s ridiculous shift peaking with a try-saving tackle on Hamish Watson after 74 minutes - but there’s also his intangible contribution.”

The two oldest players on the pitch on Saturday will be the two skippers, with both Johnny Sexton and Alun Wyn Jones now 34-years-old. However, Sexton has a lot less experience in the role than his Welsh counterpart, and has acknowledged he must follow the secondrow’s example when it comes to dealing with the referee. “Yeah some of the best captains I ever watched growing up, they got the balance right but seemed to put the pressure on the refs quite well and Alun Wyn Jones is a great example,” he admitted. “He has that balance right, where he has a good relationship with them but is able to apply pressure at times and sometimes get them to check things. So it is a bit of a skill and he’s obviously done it for a lot longer.” France’s Romain Poite will be the man on the whistle at the Aviva Stadium. Meanwhile Ireland Under-20s are looking for a second Six Nations win against Wales at Musgrave Park tonight, with the visitors arriving on the back of last weekend’s 17-7 home defeat to Italy (kick-off 7.15pm, RTE 2).

1 Coronavirus: What we know so far about how Ireland is affected
2 ‘I woke up the next day in a guy’s house covered in bruises’
3 Coronavirus: Ireland plans for massive increase in tests
4 Woman (38) appears in court charged with murder of Garreth Kelly
5 Garda Commissioner ‘stands over’ IRA-Sinn Féin remarks
6 What is coronavirus and what should I do if I have symptoms?
7 Sinn Féin’s problem with names much more than mere wordplay
8 Róisín Ingle: The resilience of my children has taken my breath away
9 Dublin stabbing: Parking space was at centre of previous rows, gardaí told
10 State would need 16 fighter jets for full air defence capability, expert says
11 Gerry Thornley: IRFU facing logistical issues rescheduling Six Nations games
12 Miriam Lord: Lady Lou crowned the People’s Taoiseach at Liberty Hall
13 Irish Rail may have to suspend Sligo line services due to floods
14 Coronavirus: Irish holding back on holiday plans
15 Soreness is good, scales are pointless: The 10 biggest myths in fitness
16 Couple challenge decision over access to Killarney lake
17 Dublin nightclub drops entry fee and asks for charity donation instead
18 Woman convicted of disguising herself to conceal murder
19 Gordon D’Arcy: Change has to happen before Ireland's trip to Paris
20 Irish in Italy on coronavirus: ‘The city is in a bit of panic – the streets are empty’
21 Woman was murdered by husband in staged boating ‘accident’, court told
22 Claim that IRA controls Sinn Féin ‘based on hearsay’, says Ó Cuív
23 Wealthy investors’ legal challenge against Revenue fails
24 Coronavirus: Ireland-Italy match is called off, IRFU confirms
25 Coronavirus: British government calls for calm after eight schools closed
26 SF criticise delay as next bid to elect taoiseach unlikely until late March
27 Oil barrels removed from ‘ghost ship’ stranded on Cork coast
28 ‘Black Americans and Irish have a lot in common. I feel we’re connected’
29 Tax burden on Irish households among lowest in EU
30 Coronavirus: Some schools send pupils home following Italy trips
31 Could Ireland put towns under lockdown if coronavirus arrived?
32 Paraic O’Donnell: MS is meticulously destroying me. I am being unmade
33 Excluding Sinn Féin from Government is hypocrisy and also bad politics
34 Duffy says she was ‘raped, drugged and held captive’
35 Core blimey: How a 62-year-old man planked for eight hours
36 Dave Hannigan: Tyson Fury, Trump’s perfect heavyweight champion
37 Coronavirus: ‘All bets are off’, says aircraft industry chief
38 ‘Look sexy. Look hot. Don’t be so provocative. You’re asking for it’
39 Army reservists not fit enough for exercises, says general
40 Bank leaked my loan request to family who tried to rip me off
Real news has value SUBSCRIBE