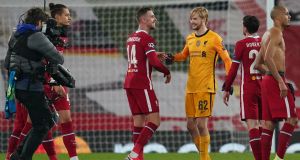 It was a night to remember for Caoimhin Kelleher on Tuesday as his clean sheet helped Liverpool into the last-16 of the Champions League with a 1-0 win over Ajax at Anfield. The Cork goalkeeper pulled off a number of impressive saves as Jürgen Klopp opted for him ahead of Adrian in the absence of the injured Allison. Afterwards Klopp praised the 22-year-old who he said had deserved his chance. Elsewhere, Manchester City ensured safe passage into the last-16 with a 0-0 draw away to Porto. Earlier in the evening the Ireland women’s team had seen their Euro hopes dashed after a 3-1 loss to Germany in Tallaght which brings to an end a campaign which almost saw Vera Pauw lead the side to a first ever major tournament. And while the manager’s future remains uncertain, she insists that the team can reach the next World Cup after gaining experience from this near miss.

Moving on to rugby and Gordon D’Arcy writes in his column this morning that “there are way too many outstanding questions about what David Nucifora is doing for Irish rugby’s long term future and his refusal to answer them this week should not be accepted by anyone who truly cares about the game.” Nucifora has been guarded about discussing certain internal IRFU matters with the media in recent times and D’Arcy writes that “a media strategy that essentially sticks two fingers up at anyone who asks a question Nucifora does not have an answer to is bad business for everyone involved.” On the subject of things like player contracts, 90 or so players see their contracts run out next June and that gives a lot to think about for players on the other side of 30. Their futures beyond next June would normally have been resolved by now, but the IRFU has suspended all negotiations until next year. One of those – Johnny Sexton – has reiterated that he wants to continue playing.

7 Five habits learned during the pandemic that we should keep

8 This warm, spicy stew can be rustled up in 15 minutes

10 Is paying someone to clean your house the last word in middle-class privilege?

11 The most Irish thing ever? Ballyhaunis Three identified in quick time

13 Nuns who ran the Bessborough home in Cork sold part of site for €6.85m

16 Mary’s story: Roscommon woman believed a lifetime of exile was as it should be

17 Almost 6,400 healthcare staff are off work due to Covid-19 as hospitals face virus peak

18 Netflix has spent millions on its films, so why are they so mediocre?

20 The chickpea stew that broke the internet in the US is here. Give it a go

21 Una Mullally: Will Lockdown 3.0 bring about a political awakening?

31 David McWilliams: What a Doc Martens boot can teach us about the wealth gap

32 Q&A: Covid-19 new variants in Ireland - everything you need to know

33 We’ve had decades of poverty, stifled dreams and lives unlived. But look on the bright side

34 How did Ireland jump from low Covid base to world’s highest infection rate?

40 Michael Harding: The woman at the checkout said my mask made me look constipated