Joanne O’Riordan: Killarney Legion GAA club give an insight into the new normal 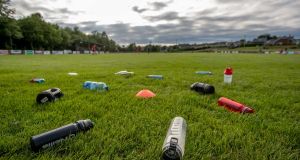 Players are following the rules but delighted to be back as GAA season resumes. File photograph: Inpho

There wasn’t a ball kicked, and yet Killarney Legion GAA grounds was full of activity. The grass in their brand new pitch was being mowed, ground for lights was being drawn out, and the anticipation was real.

On the pitch directly across, the sound of balls hopping, lads shouting and managers giving final instructions greeted the awaiting fans. Socially distant, with smiles on their faces on a fine summer evening, football is back, Covid-19 can stay at the gate.

This time, the atmosphere is different. Although this is only a challenge match against Templenoe, those in attendance were discussing how uneasy they were about the new norm.

The play, for a challenge game, is physical. Kerry players are involved in tight markings which always explode into minor tussles, the referee, who now changes in his car, probably prays there won’t be any major talking point.

Back on the training ground, everyone is scattered in cars. Some are changing for actual training; some are heading up to the gym to work on niggles while some are just on the sideline counting down the days for the team to return. Pat Flanagan, Legion coach, says everything is going as expected. “Watching the Bundesliga and seeing how muscle injuries spiked, we were expecting a few lads to pick up injuries, but generally everything is going well”.

Club players Finbarr Murphy and Danny Sheahan are in the same boat. “So, I picked up a hamstring. I’m ready to go, but it’s just minding it at the minute. It’s been a long time not doing anything, so things like that were bound to happen”, explains Sheahan.

Finbarr gives us an imaginary timetable if Covid-19 didn’t hit. “God, some years we wouldn’t be going well, and we’d be back in December! This time we finished December 15th after the East Kerry final and we started back training mid-January. I think we had a few league games and then lockdown happened. So, for us, it was weird because we had no training and no games. Whereas on a normal year we’d have been tipping away, yet no games”.

Looking around the club grounds in Direen, the set-up is impressive as far as safety and implementing measures go. As soon as anyone bolts for the pitch, volunteers are out with a thermometer checking temperatures. An isolation room is set up if anyone is over 38 degrees, a doctor is called to deal with whatever needs to happen next.

The lads also have designated bottles bought from referee Seamus Mulvihill, who also runs a gift shop with personalised gifts in Tralee. Each player pays €10 or is obliged to bring one of their own. Things are laid out so it’s easy for a player to identify his own bottle and sanitiser is also available around the pitch.

Back to the players, they feel safe within their own grounds, but what about other clubs, are they as restrictive and secure? An awkward silence lingers until Danny Sheahan pipes up. “It’s all down to trust really . . . sure if you don’t have that, what else can you do? Like, when teams come here, we actually checked their temperatures to make sure the game could go ahead. I think we did the referees too”. The surrounding players seem satisfied, but eventually, the topic of Killarney and Covid-19 parties comes up.

House parties are a whole other debacle. It’s people renting Air B&B’s, not actual Killarney people and generally, these people are selfish. Has anyone been tempted or maybe passed by one of these parties? “We are genuinely all good friends. If we go out, it’s with each other nine times out of 10. We’re training now so we can’t go, but none of us are organising anything. It really is outsiders. A few of us did go to the beach, but we kept to ourselves and just hung around together”, says Finbarr Murphy. The consensus for the team is individual and personal responsibility is paramount.

Now for the obvious question: are any of you thinking about Covid-19?

“On the pitch, I’m just thinking about which leg to kick off of! No, look we’re cautious anyway. Some have elderly parents, sick children, so you’d be cautious. The club are doing everything possible to be safe. We check into our app every day . . . it’s up to us like,” says Finbarr. Which leads Sheahan to come with the line that makes the whole group laugh.

“I’m not worried about anything only if we f*cking win. To be honest, my mother doesn’t let you in unless you’re clean and my grandfather is elderly, so yeah, it’s on your mind but not on the pitch. I get what’s going on outside the pitch, but for us getting back out playing it’s beneficial for our mental health as well as physical.”

And on that note, the inter-county boys, James O’Donoghue and Brian Kelly come into the conversation. “For me, I think we’ve just to learn to live with it and just do what we’re all asked to do. In the bank [where he works], I’m responsible to keep washing my hands, stay two meters apart and just be behind my screen,”says former Footballer of the Year, O’Donoghue.

And what’s it like with Kerry and training? The club versus county divide almost reached boiling point during lockdown. “Honestly, there’s no pulling off us to go do this and that and cause a divide. Peter [KEANE]and the lads know we’re out playing games, hopefully for eight weeks if we keep winning but at least three. It obviously depends on the coach really in each county, but that’s where the Kerry management comes from.

“The only time we ever see them is on zoom for individual stuff, but it’s all about Covid stuff. I think if we get knocked out with the club, we might be back to Kerry but there’s no set date.”

“Keepers are isolated, so it’s easy for us.” jokes Kelly. “No, when we started, it was individual obviously. Then it was groups of four. But sure that was a disaster because it was just us tipping away. Someone would tell us to do five sprints, but sure we’d be slack enough. Once it got to 15 vs 15 again, it felt good. I’ve elderly parents, so I have to be cautious too. They followed all the cocooning laws and everything. They’re out now, wearing masks and being good. Obviously, it’s a concern what if I bring it back, but we all wanted some normality”.

The club championship for Legion kicked off with a tight victory over Kilcummin in Dr Crokes GAA grounds. My beloved wheelchair section in the stand is a temporary away dressing room, which left my father and I in a Dougal from Father Ted scene of minding Kilcummin gear.

A local derby which was full of tackles, tussles and intensity. As the ball was kicked, a rainbow peeped out over the surrounding houses, where people gathered to watch the game if they weren’t allowed in. Overall, there was light at the end of the tunnel, but in an incredibly fickle time, who knows if that light will remain and bring us back to relative normality.

For now, it’s all about trust, personal responsibility and owning up with very little guidance for clubs and their players. And above all a lot of hope that the season will continue without any major glitches.

1 Heroic insanity: When Michael Dunlop raced home in memory of his father
2 Gerry Thornley: Consistent trailblazers New Zealand once again ahead of the posse
3 Champions League feast awaits but no party time in Lisbon
4 Trump prefers Jordan to James because ‘he wasn’t political’
5 Sturgeon threatens Scottish football shutdown after Celtic player’s trip to Spain
Real news has value SUBSCRIBE
Here is your handy guide to sport on television this week