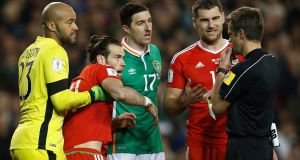 Wales’ Gareth Bale is booked by referee Nicola Rizzoli after a tackle on Ireland’s John O’Shea during the World Cup qualifier at the Aviva Stadium. Photograph: Matthew Childs/Action Images via Reuters

It didn’t feel as though Ireland against Wales had been played in a bad spirit, but evidence to the contrary was mounting up. Glenn Whelan was running around with a bandaged head after a kick in the face from Aaron Ramsey. Wales would argue that Whelan was getting his just deserts – just before half-time he’d stopped his Stoke City team-mate Joe Allen going past him by planting a forearm into Allen’s jaw.

Shane Long had dealt out some rough justice to Ashley Williams, who earlier had assaulted Jon Walters, and Gareth Bale had just gone in the book for missing the ball as it came across goal and instead lunging studs-first into the shin of John O’Shea – a foul for which a stricter referee than Nicola Rizzoli would have sent him off.

If only he had, we would have been spared the horror that came next. In the next move Long gave it to Walters whose attempted cross from the right was blocked by Wales wing-back, Neil Taylor. The ball ricocheted into space, Séamus Coleman darted towards it, but as he made to cross the loose ball, Taylor arrived with an over-the-ball challenge that hit Coleman midway up the right shin as he tried to kick the ball.

The crowd howled in outrage as Coleman went somersaulting over the challenge, his shin horribly bent 90 degrees at the mid point. On landing he first leaned forward to look at his shin, then sank back onto the grass in despair. Rizzoli ran straight over brandishing the red card.

Taylor looked sickened when he understood the consequences of the foul, and seemed to try to apologise to Coleman before he left the field, but this is what sometimes happens when you go in violently over the ball, and this is why challenges like the one Bale had just got away with should be red cards.

Rizzoli was the referee on the scene when Hector Moreno of PSV broke Luke Shaw’s leg in a Champions League match in 2015. Maybe it’s time he started taking a dimmer view of these incidents.

Until then, the match had slipped by in a kind of somnolent haze, interrupted only by the sallies of a trumpet player connected to the main stadium sound system, who blasted out standards like “Come On You Boys In Green” and “Olé Olé” with an aggravating intensity. Why, you wondered, were Ireland copying England and their travelling brass band, which is hated by most of their fans?

You idly wondered what might happen if Wales scored in the middle of one of the solos – would the trumpeter doggedly carry on? In fact, this almost happened at the end, as a late Wales miss saw an oddly sudden and strangulated finish to a rendition of #COYBIG.

It was no surprise that Ireland struggled to create chances. Martin O’Neill knew that the losses of Wes Hoolahan, Robbie Brady and Harry Arter would deprive his side of much of its creativity. It was notable that all three nominees for Ireland’s Goal of the Year in the recent RTÉ awards were either scored or set up by Hoolahan, who provided deadlock-breaking passes against both Moldova and Austria.

There was yet another setback just before kick-off as James McCarthy slipped in the warm-up and aggravated the injury he had been feeling during the week, meaning that David Meyler was promoted to the starting line-up. The team Ireland ended up with was at least solid and indigestible, a dense fibrous mass defying Wales to break it down.

There had been a few questions to O’Neill and Roy Keane during the week as to how Ireland were going to contain Gareth Bale. The Welsh galáctico, who was lurking in the space between Ireland’s defenders and midfielders, had his first involvement on four minutes, when he sneaked up behind to rob the ball from the dawdling Whelan – but as he geared up to surge forward McClean came sliding in from the blindside to knock the ball away and draw a great roar from the crowd.

McClean, who wore number five in tribute to Ryan McBride, may not be the best player in this Ireland team but his attitude means he is the one the fans most identify with: he ended up winning man of the match, though it was not an occasion to celebrate. The whole occasion felt unworthy of Coleman’s suffering.

It was not one of Bale’s more memorable performances as Ireland effectively cut off the supply to him. There was a free-kick early in the second half he put straight at Darren Randolph and a long-range shot wide just after that, but the only time he got close to Ireland’s goal was when he committed that bad foul on O’Shea.

Bale almost stole an undeserved victory for the Welsh five minutes from time, getting goalside of Stephen Ward on the left, driving towards the D and turning Richard Keogh before hitting a shot that looked bound for the top corner until it flashed just wide post. There was to be no insult added to injury.

1 Ireland’s autumn of discontent continues with abysmal Georgia showing
2 Ireland 23 Georgia 10: How the Irish players rated
3 No fireworks but Limerick get the job done against Galway
4 Ireland grind their way to grisly win over Georgia
5 Jim McGuinness: There is a way to save championship and make it competitive
Real news has value SUBSCRIBE
Here is your handy guide to sport on television this week