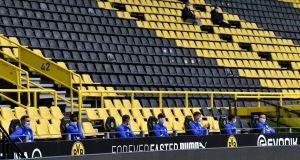 The weekend marked the return of the German Bundesliga, the first of Europe’s major football leagues to resume behind closed doors. Defending champions Bayern Munich beat Union Berlin 2-0 away from home yesterday, while on Saturday the fixture of the day saw Borussia Dortmund thrash rivals Schalke 4-0. That game was marked by both the eeriness of an empty Westfalenstadion, as well as another ice-cold performance from 19-year-old Erling Haaland. And in his column this morning Ken Early has suggested fixtures behind closed doors could be moved to better suit people’s lives and the TV schedule, with a weekend slot no longer necessary without supporters. He writes: “Who wants to spend sunny summer Saturdays sitting at home watching empty-stadium football matches? There is no longer any good reason for these games to occupy that precious leisure-time real estate. It’s obvious that weekday evenings are now the best time for them: something new to watch at a time when it’s more likely you have nothing better to do.”

Live golf also returned yesterday, with world number one Rory McIlroy taking part in a Covid-19 charity event at Seminole in Florida. And McIlroy, alongside playing partner Dustin Johnson, was victorious in the Driving Relief two-on-two charity skins, as the duo edged Rickie Fowler and Matthew Wolff in a closest-to-the-hole tiebreak. During the event US President Donald Trump phoned into the television commentary and was asked about the criticism he had received from McIlroy last week. Trump said: “A lot of them (golfers) are very political, actually. A lot of them like my politics very much and some don’t, I guess. The ones that don’t I don’t get to see as much.”

1 In six months we will be in the grip of a 1980s-style recession
2 Coronavirus: A further three deaths and 47 new cases reported in the State
3 Luke ‘Ming’ Flanagan bares his bottom half to European Parliament
4 ‘I saw young girls get kicked, hit, sprayed and dragged off gasping for air’
5 Black Lives Matter protest planned for Dublin is cancelled
6 Donohoe warns of cost to State of pandemic measures as public finances deteriorate
7 Chartered Land gets green light for Dublin’s tallest tower on Parkgate Street
8 Covid-19: Harris urges people not to think it’s ‘mission accomplished’ ahead of next phase
9 Michael McDowell: Black Americans fear the future and so should we
10 With Lincoln looking on, the crowd dropped to their knees as 7pm approached
11 Easing restrictions: What exactly will happen next Monday?
12 Trinity College Dublin to resume with as much face-to-face teaching as possible
13 ‘Tralee felt friendlier than Killarney. We discovered a different welcome there’
14 Brothers charged with raping, sexually assaulting their younger brother in 1990s
15 Normal People: Full-frontal nudity was not its most radical feature
16 Will Lafayette Park spell the end of Trump?
17 Diarmaid Ferriter: 1920 was a year of violence, trauma and terror in Ireland
18 Property price drop of up to 12% this year a ‘reasonable’ assumption – McDonagh
19 Michael Harding: How I learned to stop worrying and love my enemy
20 Angela Merkel sweeps in to save the euro zone
21 Avoca wins battle with Monkstown locals over cafe operation
22 ‘Did I miss anything?’ A modern Rip Van Winkle emerges, blinking, into lockdown
23 Gardaí move against cyber crime, prostitution gang in Dublin
24 Trudeau lost for words when asked about clearing of protesters for Trump photo
25 Normal People: The origins of Connell and Marianne
26 Church of England rules Irish inscription on grave stone must have translation
27 Jacob Stockdale gives keyboard warriors the slip in textbook fashion
28 Remote working: Ending the lunacy of pointless commutes
29 Aer Lingus wants quarantine period axed to resume flights in July
30 Sweden should have done more to combat coronavirus, health chief says
31 Dublin had sunniest month on record in May with almost 300 hours of sunshine
32 Google facing $5bn lawsuit for tracking in ‘private’ mode
33 Farmer dies after falling from quad bike in West Cork
34 Should my mam wait for house prices to drop before buying?
35 No personnel have rejoined Defence Forces under scheme, Dáil told
36 Róisín Ingle: My body has seized up while in lockdown
37 More than 200 people contracted Covid-19 while in hospital for other conditions
38 Netflix: 10 of the best new shows and films to watch in June
39 Making dinner is the new getting dressed. Just ask Selena Gomez and Gigi Hadid
40 We need to pay very close attention to what is happening in Britain now
Real news has value SUBSCRIBE