Ken Early on Frank Lampard getting an easy ride; McCaffrey’s departure could be a big blow for Dublin 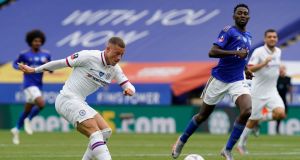 They’re the moments that changed Irish sport and will be remembered forever. In a new series starting this morning, we look at some of the biggest moments in Irish sporting history and the effect they had on the landscape here. We start this morning with a look back at Katie Taylor’s gold medal win at the 2012 London Olympics. “The gold medal wasn’t the end, it was a pause. It wasn’t completion, it was the start of something else. Everything was being sealed for some other part of her life, not now. But for that moment in time post Olympics Katie Taylor had captured the zeitgeist,” writes Johnny Watterson. In his report from the day, Keith Duggan wrote that it was a beautiful, unforgettable moment of perfection while Mary Hannigan takes an offbeat look back at the time including the proclamations from Taylor’s opponent that Ireland had paid off judges as well as Boris Johnson talking about beach volleyball players as “glistening wet otters”.

On to soccer and Chelsea booked their place in the FA Cup semi-finals with a win over Leicester yesterday – they will meet Manchester United at Wembley while Arsenal will play Manchester City – but in his column this morning Ken Early asks just why Frank Lampard is spared so much criticism from pundits. “Such is his glittering reputation in the game that he has to work twice as hard to get criticised as some other managers do,” he writes. In yesterday’s other quarter-finals, Kevin de Bruyne helped Manchester City to a 2-0 win over Newcastle while Arsenal sank Sheffield United to book their place at Wemblety. The weekend was, of course, dominated by the aftermath of Liverpool’s Premier League title win and in her TV View column this morning Mary Hannigan writes that legends of the past were given their moment in the sun but not without a number of technical glitches.