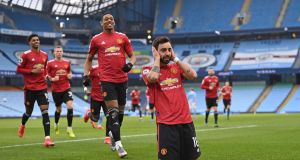 It was certainly a Sunday for Manchester United fans yesterday as Ole Gunnar Solskjaer once again got the better of Pep Guardiola, his side ending Manchester City’s winning run and creating a small bit of breathing room ahead of Leicester in second place. Bruno Fernandes opened the scoring for United before Luke Shaw made it two in the second half. Shaw has enjoyed a stellar season so far for United and yesterday’s performance was a fitting reward. Earlier in the day Liverpool’s travails continued as Fulham consigned Jürgen Klopp’s men to a sixth straight loss at home. Afterwards Klopp said it wasn’t a case that his players were lacking hunger but, in his column this morning, Ken Early writes that it is a fair question to ask whether the German has responded correctly to the extreme demands of this Covid-hit season. “Liverpool’s pressing game needs a high defensive line. That’s fine when you have Virgil van Dijk and Joe Gomez, but not so much when you have Rhys Williams and Nat Phillips. Klopp has persisted with the system, but without top central defenders the system no longer works. Maybe he needed to come up with another idea,” he writes. In the final game of the weekend Spurs continued their resurgence thanks to a brace each for Harry Kane and Gareth Bale as they saw off Crystal Palace to continue a possible Champions League push.

Moving to rugby and Leinster and Munster booked their spots in the Pro14 final with wins at the weekend but both head coaches are likely to field weakened terms for the decider on March 27th given its’ tricky rescheduling between the final weekend of the Six Nations and the resumption of the Champions Cup. In Leinster’s win on Saturday, Ulster’s Andrew Warwick was shown a red card for dangerous play – a decision which caused some controversy and one which Dan McFarland says he will be speaking to the referees’ manager about.

6 Coronavirus: 394 new cases and no further deaths reported in the State

9 Will any bank give my son and his wife a mortgage?

12 Una Mullally: How to make Dublin’s north inner city better for the locals

15 Vaccination and modified behaviour point us back towards normality

16 Covid-19 Vaccine Tracker: What's available in the Republic of Ireland and what else is coming?

22 ‘I’m cheating on my husband with a married man – can we ever trust each other?’

26 School homework: Does it have any benefit at all?

30 Mary Coughlan revisits her past: ‘It was everywhere. Bags of cocaine, champagne and tequila’

35 Ken Early: It’s time for Alexander-Arnold to move to the middle