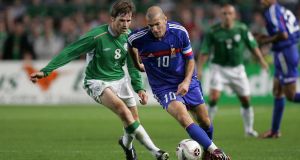 Kevin Kilbane tries to close down Zinedine Zidane during a qualifier for the 2006 World Cup, where the French midfielder would steal the show again. Photograph: Morgan Treacy/Inpho

The completion of the 2019-20 Premier League season hangs in the balance, with football suspended everywhere in Europe - apart from Belarus - due to the global coronavirus pandemic. With the 2020-21 season scheduled to start on Saturday August 8th, time is running out to finish the current campaign. However in his column this morning, Ken Early suggests it might make more sense to do so, rather than start all over again. He writes: “Yet this logic also depends on the assumption that it will be possible to begin the 20-21 season on time. If distancing measures are still needed in August - and if the virus continues to circulate in the community, then why wouldn’t they be? - then you reach a point where everything is such a huge mess that you might as well finish off the last season before figuring out when and how to kick off the next one.”

Today sees the first in a series of pieces in which Irish Times journalists will be delving into the memory banks and discussing their favourite sporting moments. Seán Moran kicks things off by alluding to what a thankless task selecting just one moment is, he writes: “So much happens in a lifetime and sport conveniently lays itself out in neatly tagged years and seasons. Sorting out memories - never mind ranking them - is hard enough with all the digression and tumbling down rabbit-holes.” Meanwhile Emmet Malone has looked back to the 2006 World Cup quarter-final between France and Brazil, and the magic of Zinedine Zidane in a 1-0 victory. “When Zidane pirouetted past three Brazilians in the first minute, however, you suddenly sensed that it might not matter what the defending champions tried. It felt like a Roy Keane against the Netherlands opening moment; different and yet the same and it suggested that this was to be another of the French midfielder’s great days.”

1 Taoiseach has confirmed schools will reopen at the end of August
2 We need to pay very close attention to what is happening in Britain now
3 Garda to scale down Covid-19 enforcement for June bank holiday
4 ‘Do I really care?’ Woody Allen comes out fighting
5 Boris Johnson had little choice but to back Dominic Cummings
6 Michael Smurfit: ‘I asked Trump to invite me to the White House for my 80th birthday’
7 The strain is starting to tell on Brendan O’Connor
8 Covid-19: Between six and 12 per childcare ‘pod’ when sector re-opens
9 Minnesota police release CNN reporter arrested live on air
10 ‘Wiggle like a snake, waddle like a duck’: Hucklebuck singer Brendan Bowyer dies at 81
11 What exactly will happen in phase two of easing restrictions?
12 Twitter accuses Trump of ‘glorifying violence’ after Minnesota ‘shooting’ tweet
13 Turbocharge your barbecue: Tips from the pros for cooking over flames
14 Trump says, ‘I have the best words.’ Now this comedian’s going viral for lip-syncing them
15 Household savings soar as consumers stop spending
16 Private hospitals ‘takeover’ by State will not be extended past June
17 Quarantine may be lifted for arrivals into Ireland from countries with low Covid-19 cases
18 Lockdown must be eased to stop Ireland returning to the 1980s
19 Sideline Cut: Vignette shows why Bird is the true shark in The Last Dance
20 Small businesses are cannon fodder in zealous anti-virus experiment
21 Universities are preoccupied with market growth as if educators were stocks and shares
22 Those involved in Kinahan crime group were paid €20,000 to set up a ‘hit’ – court
23 Woman loses damages claim over BreastCheck screening
24 ‘I’m so lucky to be in the Caribbean – a million miles from Derry Girls’
25 New rules for arrivals to Ireland start today - what is changing?
26 Elon Musk’s SpaceX suit: James Bond meets James T Kirk
27 Farrell and O’Connell provide insight into changes in Ireland’s analysis
28 Miriam Lord: Taoiseach is trapped in a Zoom session from hell
29 The old man and the sea: A view from Dublin’s shoreline
30 Poorest households in Ireland see biggest increase in Covid-19 cases – CSO
31 Almost 1,000 students fail to register before calculated grades deadline
32 Coronavirus: Universities plan to limit student access to campuses
33 Liverpool and Everton to oppose plans to play games at neutral venues
34 All students will not return to school even if social distancing relaxed – McHugh
35 Lady Gaga: Chromatica review – A star is reborn in this return to fully fledged pop
36 Return of cross to rebuilt Prussian palace vexes some Berliners
37 The momentum behind calls to ease lockdown may become irresistible for politicians
38 ‘Maybe I was arrogant thinking Covid-19 wouldn’t affect me as badly as it did’
39 Irishwoman in New York: I didn’t fear getting Covid-19 but I should have
40 Tax and the Pandemic Unemployment Payment: Your questions answered
Real news has value SUBSCRIBE