John Doyle and Ciarán McKeever called up by Ireland 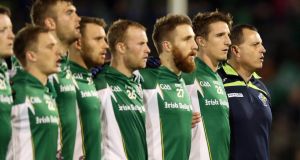 Armagh’s Ciarán McKeever and Kildare’s John Doyle have been called into the Ireland panel of the second international rules test at Croke Park on Saturday.

Doyle will take the place of Mayo’s Aidan O’Shea who will contest his county’s SFC final with Breaffy at the weekend, while former vice-captain McKeever is called upon to cover Galway’s Finian Hanley, who has suffered a hamstring tear.

Manager Paul Earley has, however, been able to call on vice-captain Aidan Walsh, who was initially a doubt until scans on his knee showed “bruising to the bone but no ligament damage”.

Ireland lead the series by 22 points after a 57-35 win in Kingspan Breffni Park last weekend.

Disappointed I wont be playing for Ireland this weekend really enjoyed last sat nyt....but big weekend for the club! First ever county final