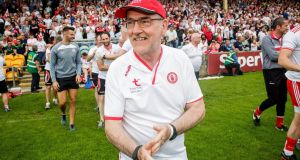 The inaugural Super 8s reached their conclusion at the weekend, with Tyrone booking their place in the All-Ireland semi-finals after they marched on Ballybofey and beat Donegal 2-17 to 1-13. And in his column today Jim McGuinness reflects on a fixture which has helped give the new championship format some real credibility, he writes: “This was the biggest game hosted by MacCumhaill Park in Donegal’s long history. It felt like a big occasion and it was great to be there.” Mickey Harte’s side progressed into the last four after they impressively pulled clear of their old rivals down the home straight - they outscored the hosts 2-7 to 0-2 in the final quarter - but McGuinness remains uncertain of their All-Ireland credentials. “The central question is - and I’ve asked it before - can the Tyrone collective win an All-Ireland? I don’t know but I have my doubts,” he writes. “Can you win an All-Ireland without a marquee forward? Can you win an All-Ireland without a marquee free-taker? I’m not so sure. They will believe that they can be in the All-Ireland final and Monaghan won’t like to see the red-and-white jersey coming. But Monaghan are well placed themselves.”

Ireland’s hockey heroes were guests of honour at a civic reception in Dublin yesterday, after their remarkable journey to the World Cup final. Despite losing 6-0 to the Netherlands in London on Sunday, the tournament could go down as a watermark moment for women’s hockey in Ireland - if, as Johnny Watterson argues, funding for the sport improves. “The critical difference between hockey and other Irish sports, which hope to qualify for the Tokyo Olympic Games in 2020 is that, while all the sports in general are funded by Sport Ireland, players on the Irish women’s hockey team are not part of the individual carding system,” he writes. “The Irish carding system is designed to give money directly to athletes so they can live and train as closely as possible to professional levels. . . hockey is not even on the carding ladder.”