Leading horse trainer Jessica Harrington has been crowned The Irish Times / Sport Ireland Sportswoman of the Year for 2017. 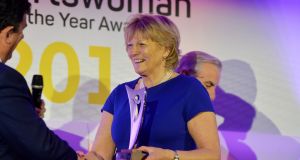 Trainer Jessica Harrington has been named The Irish Times / Sport Ireland Sportswoman of the Year for 2017. Photograph: Alan Betson / The Irish Times

Leading horse trainer Jessica Harrington has been crowned The Irish Times / Sport Ireland Sportswoman of the Year for 2017.

A memorable year for the Co Kildare based trainer saw Sizing John – ridden by local jockey Robbie Power – gallop to victory in the Irish Gold Cup, the Cheltenham Gold Cup and the Punchestown Gold Cup. It’s the first time a horse has won all three races in the same year.

Harrington’s success in the Cheltenham Gold Cup on St Patrick’s Day was all the more remarkable given it was her first time to enter the race. In the midst of those successes she also claimed a first win in the Irish Grand National at Fairyhouse with Our Duke.

At different junctures Harrington has described her year as dream material and “not bad for a 70-year-old”.

“It’s been an incredible year and I’ve been so lucky. It’s so very horse-dependent, that’s the key to it. Everything came together this year and when it does come together, those things happen . . . You’ve got to be hopeful that it will keep going. If we weren’t hopeful we’d be no good at all,” she said.

Last year’s winner, Olympic silver medallist Annalise Murphy, was on hand to present Harrington with the award. This is the 14th year of the awards and the trainer was among 15 monthly award winners – there were multiple winners on several occasions - nominated for the 2017 title.

Mary Davis, the CEO of Special Olympics International and long-term campaigner for the rights and inclusion of children and adults with intellectual disabilities was presented with the Outstanding Contribution to Sport 2017 Award.

Davis was CEO of the Special Olympics World Summer Games when they were staged in Ireland in 2003. It was the first time the event was staged outside of North America since the movement was founded in 1968.

The Irish Times Sports Editor, Malachy Logan, described the nominees as exceptional people who were a credit to themselves, their partners, coaches and families.

“While it’s true that women’s sport still needs more funding, greater participation levels and wider support, huge advances continue to be made. Who would have believed a few years ago that the All-Ireland women’s final could attract an attendance of 47,000 or that a boxing bill in London would be headlined by a women’s bout or that Ireland could stage a hugely successful Rugby World Cup. These are remarkable milestones in women’s sport and the ripple effect from them will be felt for years to come.”

Minister of State for Tourism and Sport, Brendan Griffin, said Ireland’s sportswomen had made a hugely significant contribution to the country’s sporting success during 2017.

“Over the course of the last 12 months, Ireland’s sportswomen have given us many wonderful memories and produced some spectacular performances which have captured the imagination of the country. Their continued success serves to inspire our children and young people and to enhance Ireland’s reputation abroad. I would like to acknowledge Sport Ireland and The Irish Times for staging these awards which recognise the incredible contribution of Irish women in sport.”

The Chairman of Sport Ireland, Kieran Mulvey, congratulated all the award winners and thanked them for being such fantastic ambassadors for both their sport and their country.

“Their performances at national, international, European and World events showcased the very best of Irish sporting talent. Events such as these demonstrate that Irish athletes continue to achieve at the very highest level. Sport Ireland is delighted to again partner with The Irish Times for the 2017 Sportswoman of the Year Awards, which acknowledge and pay tribute to 15 athletes who have risen to the very top of their chosen sport.”

The award for Mary Davis - the latest in a long line of awards – is in recognition of her achievements and years of service with the Special Olympics movement both in Ireland and internationally.

Davis, who hails from Swinford in Mayo, won the Person of the Year and Woman of the Year awards in 2003 following the staging of the Special Olympics in Ireland. Athletes and coaches from 165 countries participated in the hugely successful event supported by over 30,000 volunteers.

The Irish Times / Sport Ireland Sportswoman of the Year nominees