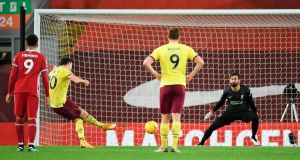 The sad news of Jerry Kiernan’s death which emerged yesterday was felt far beyond the world of athletics. The 67-year-old had been unwell in recent months. A native of Listowel in Kerry, he lived most of his adult life in Dublin, where he died on Wednesday night. After representing Ireland at the Olympics in 1984, twice winning the Dublin Marathon and, in more recent years, becoming a recognisable face on RTÉ, Kiernan was known far and wide and, as Ian O’Riordan writes, Kiernan could be unabashed in considering himself an aficionado in some of the finer things in life – national hunt racing, Barcelona football club, the Super Tuscan red wines – although running was always chief among them.

Moving on to soccer and Liverpool’s 68-game unbeaten record at Anfield was brought crashing down last night as Ashley Barnes struck late on from the penalty spot for Burnley to leave Jurgen Klopp’s side reeling. Liverpool now sit six points behind league-leaders Manchester United and have not scored a goal in 2021. After the match, Klopp questioned the penalty which Burnley had been awarded but took the blame for the defeat on himself, saying “It’s my responsibility, that’s the easy explanation. We lost the game which is pretty impossible but we did it. That is my fault.” Meanwhile, FAI chief executive Jonathan Hill says he believes Uefa still intend to host rescheduled Euro 2020 in 12 cities across the continent but that a decision will be made by March 5th as having fans in the stadium is “what creates the excitement and that unique feeling around any tournament.”

7 Covid-19: Vaccination for those aged 16-69 with serious illnesses ‘will start this week’, says HSE

8 Smother: This is what an Agatha Christie-themed Glenroe looks like

10 Up to 600 doctors may leave Irish health system in July, IMO warns

12 Ken Early: Klopp all at sea as Liverpool continue to flounder

15 McFarland will speak to referees’ manager about Warwick red card

17 How will Denis O’Brien’s departure change the Irish media landscape?

19 Moses Farrow: ‘I felt inherently like I was a bad kid. The abuse at home reinforced that’

22 Rise of private primary schools: ‘Children are in charge of their learning’

25 Do young people really need to go back into the office?

26 Eirgrid proposals to include €2bn power line around Irish coast

29 ‘My husband is unemployed. Where will he go if I leave him for my business partner?’

31 Roy Greenslade and the IRA: I was his editor. His admission raises hard questions

32 ‘He strangled me to the point where I couldn’t breathe, I couldn’t scream’